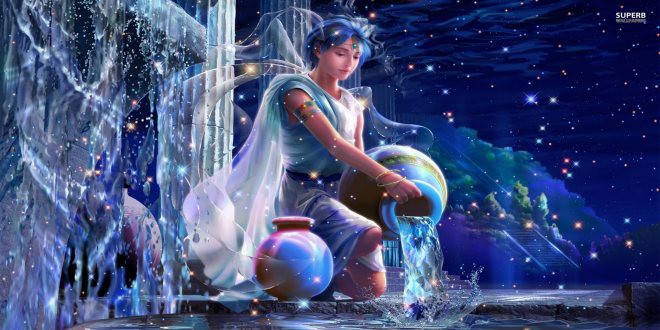 Remember the strength and purpose of the water bearer and the energy that goes with it at this full Moon.  This will allow us to maximise the opportunities available and perceive the next steps.

As we head into the first full moon of this calendar year, we again turn our thoughts and attention to the sign of Aquarius where the sun will be transiting. Aquarius is the sign said to be either ruling our current age or about to do so as we transit through an incredibly important time for the Earth’s evolution. Whenever the sun peaks with this energy, it is always a special time for us and one we could really utilise at the start of this year.

Humanity is going through the final year of a 9 year cycle, which often means a cycle of endings with new beginnings the following year. As group endeavours are an important part of the higher expression of the energy of Aquarius, it could be an important time for us to really think about the higher vision of humanity in all we do, especially leading up to this week’s full moon. If thoughts that consider the greater whole are pondered and reflected upon, much can be set up leading to the close out of this year and into the next.

Aquarius is a fixed air sign, giving it surprising mental dedication and fixed determination. The symbol itself, with the wave like lines one on top each other, give the impression of a fixed set of energy currents which almost look like electricity wires as they travel from pole to pole. It is interesting to note that Saturn was once said to rule Aquarius on the traditional level up until Uranus was discovered. Uranus, besides being the planet most associated with the coming new age, is one very much related to electricity.

Next year the earth begins a new cycle, leading up to 2025

Aquarius is also a sign strongly related to innovation and invention, leading to new technology. One might think that with the sun peaking in Aquarius in a 9 year for humanity, it might be a good time for new innovative ideas and thoughts to arise from the intuitive plane and then slowly descend over the course of the year to be manifested next year as the earth begins a new cycle, leading up to 2025.

The lower mantram for Aquarius is “Let desire in form be the ruler”. At this stage, the Aquarian energy is more desire-based in its expression, not using the powers of the mind for others but instead having a more emotional desire-based expression through the lower chakras.

The higher mantram for Aquarius is “Water of life am I, poured forth for thirsty men”. At this level the Aquarian energy takes on fully the sign of the man holding the pot of wisdom and distributing it to thirsty humanity, eager to take it and evolve. This requires the mind (air) to express itself and does so when it thinks about the greater group and whole.

There are some interesting times and transits that head up the start of the New Year. For a period of a few weeks, the planets of Mercury, Venus, Mars and Jupiter line up on the horizon for us to see in the morning. What does this mean? It is not an overly rare event and yet nor is it common. I like to think of it symbolically as a time when we can have some real personal clarity, as all of those planets are considered personal planets in astrology which really affect us on a day to day level, while the outer planets are ones that affect generations and the greater whole.

Mercury is currently retrograde and will be until the 26th of January – Australia day. When Mercury is retrograde, there is often disruption to expression of electrical currents, communications and ideas. Another good way to look at it, I think, is to take stock of the ideas and thoughts that we have and reflect upon them. If the messenger of the gods has seemingly ceased flying forward into the evolutionary direction and is taking stock, then perhaps it is a good time for us as recipients of the messages to take stock also and go over our current thoughts and ideas and to reflect and ponder them to see if we could do anything better or even change it slightly.

There are some good helpful energies around at the moment with 3 good trines in particular making transit. Saturn in Sagittarius is coming into a closer trine with Uranus in Aries, giving a strong fiery expression to the new coming forth and affording us an easy sense of responsibility in using it. Mars in Scorpio (a strong time for desire expression and passion) is in trine with Neptune in Pisces, giving an intense and strong expression to a higher perception of spirit and to artistic expression, there for us to use.

At the time of the full moon, there is a Pluto/Mercury conjunction in Capricorn. This is not an overly dramatic thing in itself as it happens once a month, but it is in outer trine to Jupiter in Virgo. This is an earth trine, with Virgo and Capricorn highlighted. Jupiter in Virgo is said to bring Virgo to its highest expression, according to the information the Tibetan has given us on astrology [Esoteric Astrology, page 263]. Jupiter is currently retrograde, going back into the trine with Pluto which it did in October last year. This would suggest some sort of wisdom transformation communication, dulled with a Mercury retrograde, to be thrust upon us soon, in one form or another. Being earth it will be something tangible.

The moon will be in Leo at the time of its fullness, in the 4th house of family. The axis of Leo and Aquarius is one of balancing a focus on the self (Leo) with a focus on others or the greater community (Aquarius). So what will be important is learning to balance personal emotional expression, especially with regard to loyalty to our family (Moon in Leo in the 4th house) with an identification with group energy and the community and its expression in the public arena (Sun in Aquarius in the 10th house). This represents the sun and moon opposition for this month.

On the ascendant for this full moon is Aries, giving the chart some dynamic cardinal energy. This gives the chart more fire, adding to the Leo full moon. As discussed before, Aries is a great sign for initiating new ideas and thoughts and together with the sun in Aquarius, which is an air sign, gives us a sense that this will be a great time for the spark of a new idea or ideas to come forth. The Sun at the time of the full Moon is in the 10th house and near the midheaven, so any new ideas coming forth will be widely seen and be on show.

Mercury, the esoteric ruler of Aries, is in the 9th house at the time of the full Moon, conjunct Pluto. The 9th house is for the exploration of higher ideals, thoughts, religion and higher learning. This Mercury/Pluto conjunct is squaring Uranus in Aries in the 12th house. 12th house expressions are often not always easy to decipher, but this one certainly seems dynamic, with Mercury adding to the relentless Pluto/Uranus square. Perhaps something big will be expressed around this time, with Mercury adding the communication, but being retrograde we might have to work harder to apprehend it.

Remember the strength and purpose of the water bearer and the energy that goes with it at this full Moon.  This will allow us to maximise the opportunities available and perceive the next steps.
Share

Stephen is an Esotoric Astrologer and has a keen interest in the Esoteric line through the Alice Bailey books. Stephen offers astrological readings - - contact him via his Facebook page.
Previous Breathing the Radiance of Life
Next She’s Alive… Beautiful… Finite… Hurting… Worth Dying for