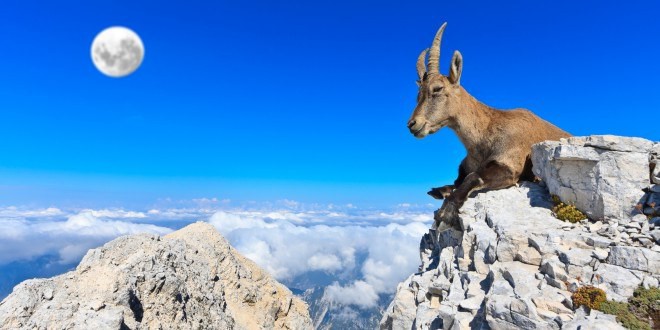 Connecting on the most subtle Levels

Capricorn is one of the most mysterious of all the signs

As we begin the new year of 2015, it is a good time to sit back and reflect over the year that was and then begin to plan for the coming year. This is made easier with the lead up of the Sun in Sagittarius, where new visions, higher ideas and thoughts can be sensed, then the planning and setting of goals in Capricorn. Capricorn is one of the most mysterious of all the signs and it is said that we do not know everything about it yet. This could be said of all astrological signs, as we will discover during evolution but with Capricorn there is much to learn, and you cannot help but to sense its influence.

Capricorn is cardinal Earth and its strategic position as both having the date where the western world begins its new year, plus of course the celebration of Jesus Christ’s birthday as Christmas cannot be denied. If we were to look to any sign for the celebration of reaching the peak or ultimate as a Human being, we would look to Capricorn. The Christ was our shining example of the Son of God and what Humans can achieve when we go through Him to the Father’s house.

In esoteric philosophy, Capricorn is also heavily involved in initiations, with the major initiations only being taken where there would be a strong Capricornian influence. This is in part due to Capricorn representing the mountain experience.

Once one has delved deep into their psyche in Scorpio and experienced the depths of their dark shadow natures, they begin their ascent out through Sagittarius which then shows them the vision of the higher life. They then become the one pointed disciple in Sagittarius and go through the plateau experience, where they follow the path straight and true leading up to the mountain. The mountain is then climbed in Capricorn, with all of its challenges, peaks and dips but forever upwards.

Once the peak is reached, and the Human being has reached the summit of his/her experience, over many, many lives, the higher mantram of Capricorn comes into play “Lost am I in light Supernal, yet on that light I turn my back”. We would assume that this means that once we have reached the top, we have completed our goals and have attained oneness with the higher part of ourselves and the universe, we bask in the light of the eternal. Yet, throughout our journey and always with us are our brothers and sisters and even though we have reached our own peak, we hear in the distance the cries of Humanity, the sorrow and unhappiness, and so we leave the light of the highest peak, and head back down the mountain to assist our brothers and sisters. At this point we discover why we have two hands, one to hold onto the mountain and the light, and the other to lift up those that seek the light.

“Lost am I in light Supernal, yet on that light I turn my back”

…there will be…a time of public, community and universal or worldly completion happening.

This chart, at the time of the Full Moon, is an interesting one as at this time, most planets are in the top half of the chart in the signs of Sagittarius, Capricorn, Aquarius and Pisces.  This is perhaps suggesting that there will be a sense of outer expression going on and also a time of public, community and universal or worldly completion happening.

There is a big collection of planets in the 9th house, suggesting a strong phase of higher learning is happening. So with the beginning of a new year, it would seem wise to be quite open about new thoughts, ideas and new trends formulating both in the world and personally.

All of this grand square is formed by Cardinal signs so expect it to be very dynamic – Think fast explosive action.

Of course no chart would be complete without some type of challenge and, continuing the trends of last year, there is a grand cross occurring at the time of the full moon involving The Sun conjunct Pluto, the Moon, Uranus with the South node and of course the North node. This will not last for too long, as both the Moon and then the Sun will move away quickly, yet what a power packed aspect. Whenever the Sun and Moon with also the North and South nodes are involved, there is a real sense of finding the balance between one’s lower and higher natures, between one’s personal expression and the feelings and expression that can benefit others, plus a sense of the completed or past and the future or what is to come. Add Uranus and Pluto to the mix and you would be well advised to perhaps accept a new change that is coming as it could just happen anyway.  One might also need to watch one’s own emotional expression in and around the time of the full moon. This will be further supported by having the Full moon in a water element, one as sensitive and intuitive as Cancer. All of this grand square is formed by Cardinal signs so expect it to be very dynamic, albeit over a short time. Think “fast explosive action”.

The ruler of this Chart, sitting on the Ascendant is Taurus, which of course is another Earth sign, like Capricorn. The ruler of Taurus on the esoteric level is Vulcan, that mysterious planet that is said to exist only on Etheric levels. In the Alice Bailey books, the Tibetan speaks about our own physical body as consisting of 7 layers, 3 as mass, liquid and gas, plus 4 levels as etheric substance, which is a finer more subtle substance but is still considered physical. This etheric substance exists but we generally know it not, for most don’t have the eyes to see.

…there will be a highlighted sense of connection on the most subtle of energetic levels.

With the Sun in Capricorn plus, at the time of the full moon, the Ascendant in Taurus with the ruling planet Vulcan, it would make sense for us to be very open to subtle happenings, to be open to intuitive responses and also to be very aware of our own thoughts both positive and negative, as there will be a highlighted sense of connection on the most subtle of energetic levels.
Share

Stephen is an Esotoric Astrologer and has a keen interest in the Esoteric line through the Alice Bailey books. Stephen offers astrological readings - - contact him via his Facebook page.
Previous Immersion in a Realised State of Being
Next What patterns are we inspired to create?