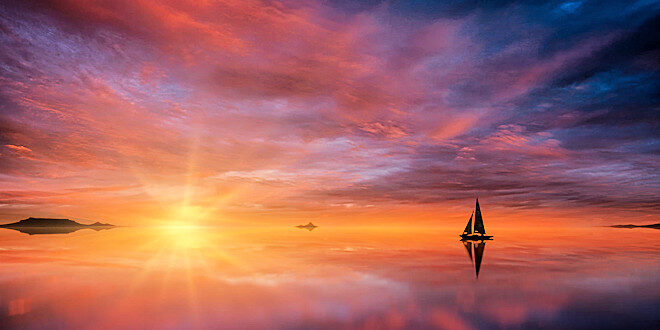 In Silence We Sail Into Spirit

…we may find ourselves in an unaccustomed silence.

In these times of quarantine and lock-down when once-busy streets are quiet and many businesses fall silent, we may find ourselves in an unaccustomed silence. If we can quell the urge to fill that silence with reassuringly familiar sounds, we might explore the deeper nature and potential of silence. The ancient proverb “Silence is golden” comes to mind and, with it, the words of a character in Thomas Carlisle’s novel, Sartor Resartus:

Silence is the element in which great things fashion themselves together; that at length they may emerge, full-formed and majestic, into the daylight of Life, which they are thenceforth to rule. … Speech too is great, but not the greatest. As the Swiss Inscription says: Speech is silvern, Silence is golden [translated]; or as I might rather express it: Speech is of Time, Silence is of Eternity.”

While silence may clear the worldly mind for creative work, it is also expansive and opens us up to the greater Life beyond the temporary ring-pass-not created from those habitual patterns of thought, feeling and activity in which we cocoon ourselves. The sounds that make up that familiar “note” may be reassuring but they can also be constraining when not in balance with the larger Life in which we participate. In silence we become open to that which is both near and most far.

When the familiar sounds of the world cease we are released into infinity like a sailing boat that slips its moorings and, as the wind fills its sails, floats on the more powerful currents within the circulatory flow of a greater life. In Silence we can sail those vast currents that carry us into the infinite realms of Spirit and into communion with the great brotherhood of the universe.

… People think that silence is simply not uttering any sound, but true power comes when the whole being is overwhelmed by silence and an energy is generated that permits communion with the Higher World. We know these hours of surging energy, and can affirm that this kind of silence is the highest tension… When silence reigns in Our Tower it means that We are experiencing this powerful tension, and communion with the Higher World will result in a renewal of forces. We need such an accumulation of new forces, just as all of life needs it…” Supermundane 89

…when we return to silence, we are reconnected

In silence, Spirit breathes into creation and the Mother of the Universe nurtures the sparks of spirit in the gestation of the worlds and all that comes to life within them. In the silence of her womb we learn the heartbeat of the universe. On birth we must remember that sustaining pulse and carry its loving intention into expression in the world. Our remembering is not an easy task when confronted with the noise of the outer world which can be so deafening. But when we return to silence, we are reconnected with the pulse of the life that beats at the heart of our world. There in the One Heart – where all hearts are one – we become complete, and the dark dream of separation dissolves in its fiery light.

After all the demarcations have been made, we inevitably arrive at the synthesis of the heart. We need not mention that silence arises from an intermingling of all the sounds. So let us learn to correlate the heart with silence. But this silence will not be a void; it will saturate space with the synthesis of thought. Just as a heartfelt prayer has no need of words, a saturated silence has no need of formulas. An intensified silence requires creation of many strata of thought as well as many benevolent desires. So the heart, intensified by silence and full of energy like an electric generator, beats out the rhythm of the Universe, and personal desires are transformed into the all-guiding Universal Will. That is how cooperation with the distant worlds develops.” Heart 68.

In the silence of the worlds all can be heard. There is no veil of conflicting sounds to inhibit clear communication along lines of resonance and responsiveness. Streams of thought flow throughout, initiated and received through the communion of hearts.

’Friendship is in silence,’ an ancient Chinese once said. It can also be stated conversely. In such a higher state thought replaces many words. People can understand each other in different languages expressed mentally. The mystery of such thought transmission remains a great manifestation of the primary energy.’ Brotherhood 244

Thus, in silence, we penetrate the veils

Thus, in silence, we penetrate the veils which separate our worldly eyes from the realisation of the greater Reality. They are an illusion of energies as explained by the Tibetan Master:

They are in the nature of opposing forces and energies which act as inhibitory factors to the aspirant as he seeks to make progress, and to the entire human family as it moves onward upon the Path of Evolution. They are not basically related to consciousness at all, for in the majority of cases these veils ‘lie on the earthward side of being and not upon the side of light’…” The Rays and the Initiations, page 195

As our bodies are born into “the earthward side of being” we may succumb to the illusion of separation – it is a separation in form only. In reality everything is an expression of the one fire which explodes through space in a myriad of sparks, yet all eternally united in the heart. For at the heart of every atom is the same fire, the essence of the One Heart, whether it is “the atom of matter as studied in the laboratory of the scientist, whether it is the human atom in the crucible of daily experience, whether it is the planetary atom, within whose ring-pass-not all our kingdoms of nature are found, or the solar atom, God in manifestation through the medium of a solar system.”

In silence we reconnect with those currents, or streams of energy, of the life-flow of the Universe

Streams of life and love empower and uplift the essential spark in every form – all interconnected within the great chain of being and moving rhythmically through form after form and imbuing substance with increasing lightness of being. In silence we reconnect with those currents, or streams of energy, of the life-flow of the Universe, the great circulatory system that sustains and purifies all that exists through all dimensions of being, and we enter into communion with the universe.
“Silence is the language of god, all else is poor translation.” ~ Rumi

Hi, I'm one of a group of authors and editors for the Sydney Goodwill website.
Previous Wisdom Bites – Planetary Archetypes
Next Virgo Sun Pisces Moon 2020