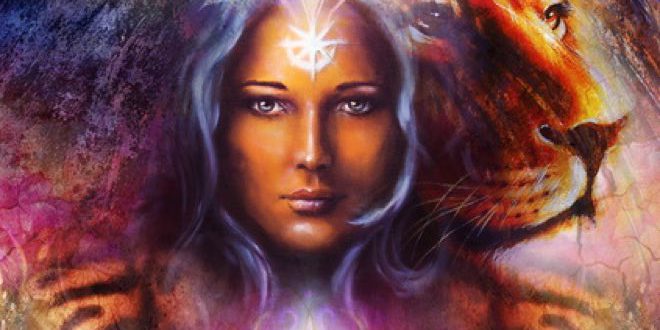 “I am that and that am I” is the higher vibrating mantram for the sign of Leo. Upon showing this to a colleague the other day, she said, “It is very cryptic”. Like all mantrams or words of power, they have an energy resonance that, when sounded together, emit a vibration out into the greater field. The power also lies in the ability to evoke a mental response from the one who is thinking about it…

Upon reflection of this mantram, we could speculate on the meaning/s of it. To say that “I am that” and yet also “that am I”, could mean that we are one and the same with the thing we are considering. I am that which I see, but also it is me that it sees, shows that inbuilt within all we see, is a common thread. That common thread could be that we are human, that we have a human body. It could mean that we are alive, like a human and an animal, and we all have needs of survival, things we need to do to keep a body alive to live.

What about if we take it a step further and think of it from a higher point of view. I am that beauty that I see and it is reflected in me. I am the higher part of me – I am that – and it is within me as much as I am within it – and that am I. To understand this mantram is to accept our own divinity, our own true essence as part of life, as part of God, as part of Creation.

Leo is symbolised by the Lion, the king of the jungle. Leo is often related to royalty, the sovereigns who were chosen or lucky to be born to be rulers of others. But what is it to rule really, what are you ruling? On the outer surface it would seem to be an area, a country. But as the walls of the earth slowly come down and borders become almost obsolete, that position will eventually hold less and less meaning, as we all learn to rule our own lives.

The power in Leo is to learn to rule our own jungle, our own lives. Ruling over our thoughts and our emotions, over our physical bodies, we learn to be the sovereign of our own lives. Learning our own true power and essence is part of why we are here. How to do that whilst realising that we are all one and the same – I am that and that am I – is part of the great mystery….

Leo commands authority and respect. During the month of Leo, it is a great time to take authority over our own lives. Leo’s are also known for their courage and daring, very important when looking to take command of our lives and use daring to do something creative. Use this time to know your own true power and essence, be daring enough to make a hard decision. Approach your life with Leo courage and do not be afraid to be different and creative. Fortune favours the brave.

The Sun rules Leo on all fronts including the traditional and Soul levels, though it is said it veils Neptune on the Esoteric/Soul level. The Sun is our life force here on Earth so during Leo it takes on more importance. In the northern hemisphere, the time of Leo is the time of summer, with many people taking advantage of the summer break and lapping up the sun’s rays during this time. Recharging the batteries and soaking up the energy of the Sun takes on an important part of this time, as is being outdoors and active.

Here in the Southern hemisphere, we have our winter. This time for us is more of an appreciation of the Sun, due to it being colder with less sunlight. As such, we make the most if it. Nothing is more appreciated than winter sun, as every gleam of sunlight is extracted and stored in the body. There is a true appreciation of the energy of the Sun as it is less. During summer, sunlight is abundant and taken for granted as it can be fierce and strong. During winter though, every light particle is considered a bonus. So symbolically, this is a great time not to waste energy but to use fixed Leo fire to hone in on what we want.

The ray rulers of Leo are Ray 1 – Will and Power and Ray 5 – Concrete Mind and Science. You can see that with this type of combination, Leo energy is meant to be a dominant force, wilful and strong with the power of the mind. One would think that it would now be a great time to use thought and Leo daring to take authority and leadership over our own lives and direct our thoughts towards recognising our own divinity. As we know – I am that and that am I…..

With the Sun in Leo during the full moon, it means the moon itself will be in Aquarius. The Leo/Aquarius axis means many things, but one of the major influences is the balancing of energies of fire and air. Leo is full of fixed fire, like an intense flame burning, wherever we put our focus during this time it can be with a highlighted eminence. You cannot miss Leo, like the Sun it is there to shine and be….Leo will allow us the space to concentrate with intensity on something, usually for ourselves.

The paradox here would be Aquarius, which is much more interested in detachment, being an air sign. Whilst Leo can concentrate on the self, with purpose, Aquarius would ask us to consider others instead. The Aquarius moon whilst being full is one where group endeavours are urged through the outpouring of feeling moon energy. To get the balance right, we must recognise our Higher Self and divinity and yet, while remaining detached, remind ourselves we are very much part of the greater whole….

Overall the chart looks quite supportive with many trine aspects creating a sense of feeling like we are backed in our pursuits and there is a guiding, sure energy behind what we do. Saturn is in Sagittarius and Uranus is still in Aries, creating trines with the Sun and Mars as it goes through Leo.

The only square in the chart, which represents challenge yet growth comes from Pluto and Jupiter, this time playing out in the houses of communication and relationships. With Pluto in the 7th house of relationship, perhaps be open to the death of some old worn out forms and old relationships that no longer serve their purpose. Finding the balance through open and truthful communication will be the challenge here.

Ruling and layering the chart on the ascendant is the watery Cancer. Adding a depth of intuitive feeling and a deeper connection to the world of sensitivity, Cancer will tone down some of the fire expression. Mixing water and fire can cause steam, but it can allow more perception to enter and keep the fire burning to acceptable levels.

Cancer is ruled by Neptune on the Esoteric/Soul level, so be open to some major spiritual expression as this energy mixes with the fire of Leo and the group feeling of the moon in Aquarius. A time to take authority over our own power and use it on behalf of our higher selves…..

Stephen is an Esotoric Astrologer and has a keen interest in the Esoteric line through the Alice Bailey books. Stephen offers astrological readings - - contact him via his Facebook page.
Previous Black Leopard and The Animal Communicator, Anna Breytenbach
Next Feel a River Moving in You