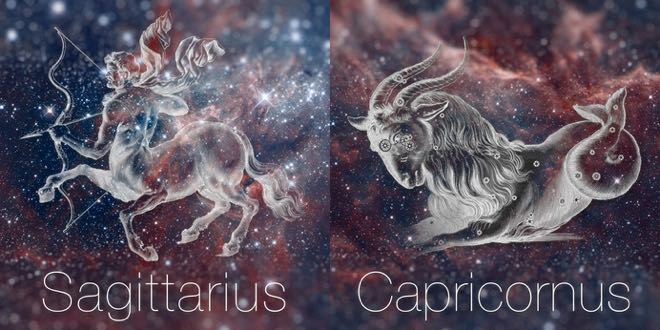 Elements of this image furnished by NASA.

For this Period over the Christmas and New Year’s break, we will only write the one article. The focus as well will be more on the energies of the signs of Sagittarius and Capricorn and not the charts at the full moon.

Sagittarians are the searchers of the zodiac. The arrow is an important symbol here overshadowing this sign and it is layered with meaning. The arrow means a few things, but one of the most important is the Path. When we arrive on the spiritual Path, the one which will lead us through trial and error to our higher purpose and Soul, we are guided in part by Sagittarius. The symbolic arrow is pointing up, showing that the Path is not just that which continues only straight, but one which guides us up in an ever-forward manner.

The Path is that inner spiritual knowing where we are guided home on our spiritual journey. Of course, this is flavoured by our own experience. The Path is not a new one, we have great humans who have gone before us and blazed a trail for us to follow. In saying that, we must blaze our own Path. What better sign than the independent, free and adventurous Sagittarius to guide us as we follow our way back to our higher self, all with the new experience of this life.

The arrow also represents the search for truth. Sagittarians are known for their bluntness, partly as they are always geared for finding and revealing the truth. They are natural teachers, looking to impart the knowledge they have garnered throughout the search on the Path, so they usually revel in truth and the revelation of wisdom. Hence why they can always have an opinion on any subject, as they have more often explored it, at least in their minds.

One more aspect of the arrow worth noting is the pointing of focus and consciousness. When the arrow is pointed and has locked onto a target, the focus is one-pointed. The ability to fix attention and apply it to an object is a great skill that we can use with Sagittarius. This is part of the reason why it rules the Path, so that we might waiver and change directions slightly, yet the ability to stay on the Path is guaranteed.

All this ties in well with the higher mantram for Sagittarius – ‘I see a goal, I reach that goal and then I see another”. The search, the learning, the gathering of wisdom, the seeing of a vision and the following and attaining of the vision is all tied to this sign. This all affords us a wonderful opportunity to see beyond the haze of the lower parts of Sagittarius (“Let food be sought”) and use the energies of the moment to realign with our higher self and the vision that it has for us and follow it, adapting as we go.

The Rays ruling this interesting mutable fire sign are – the 4th Ray of Harmony through conflict, the 5th Ray of the Concrete Mind and Science and the 6th Ray of Devotion and Idealism. It is one of only two signs that have three Rays that influence it, the other being Capricorn which we will talk about shortly.

The 4th Ray gives the ability for Sagittarius to seek out the harder route, to look within and see the two sides that seem to exist and out of that, arrive at harmony through the mixture of the two. Here the search and seeming come in very handy. Sagittarius are born philosophers and understand that through science and the exploration of the mind and ideas, truth and the mysteries of the life are revealed. The 6th Ray of devotion rules this sign, allowing the strict following and blind devotion to an ideal, once it is decided that it is right.

Of course on more mundane levels, Jupiter rules this great sign and brings with it all the excess and fun times that it can deliver. Fun times, social gatherings, good company and cheer, all these are by-products of the Jupiter influence. It is also a very good time to be active and get up and be busy, using the mutable fire of Sagittarius to great effect for getting things done……

Towards the latter third of December, the Sun’s progression through the signs changes from Sagittarius and towards the earth cardinal influence of Capricorn. During this transit time, fire mixes with earth, creating a slowing down of activity. Once we get into Capricorn and then from Christmas to New Year    and a little beyond, there is a slowing down. This is a great chance to breathe before the ascent up the mountain, symbolised by the mountain goat in Capricorn.

Capricorn is said to be one of the hardest signs to truly understand. The Tibetan Master DK said that we do not have the correct symbol for Capricorn as of yet, partly because if we did, it would release an energy that we (Humanity) are not ready for.  This in part gives you perhaps an understanding of the power of this sign and also the mystery surrounding it.

Capricorn is ruled by Saturn on both the traditional or mundane level and the Esoteric or Soul level. Much has been written about the influence of Saturn and the many effects that it is supposed to carry out for us living on the Earth. The Saturn influence does give Capricorn a sense of responsibility, an inbuilt commitment to something or to the carrying out of something. I think this is in part why Capricorns often have a sense of seriousness about them. They carry a weight at times, one that is often seemingly linked to Karma, though of course, this might not be the case at all.

That seriousness and commitment carry through this sign and I think this is partly why they often carry some level of authority. Perhaps no other sign has the absolute staying power to see something through, to climb the mountain of wherever they put their purpose than Capricorn. The higher mantram for this sign is apt – ‘Lost am I in light supernal, yet on that light I turn my back’.

The climbing of any type of mountain or obstacle is inherent within this sign and this is perhaps why they are often drawn to business and to the world of economics as this is diverse and competitive and requires all the ambition and dedication that this sign offers.

As mentioned before Capricorn is the other sign that has three Rays ruling it. Unlike Sagittarius which has three mixed Rays, Capricorn has three Rays on the hard line. The 1st Ray rules this sign, giving it access to Will and Power, much needed for a Cardinal sign and needed to climb the big mountain of their lives. It also really aligns this sign with politics and leadership, giving them responsibility in the outer world.

The 3rd Ray of Creative Active Intelligence gives this sign its access to resources and the business world. Capricorns are often intelligent and can use their intelligence to attract, arrange and manage resources on the physical plane, often also linking them with money. The right intelligent use of money is one of Capricorn’s responsibilities to bear, I believe.

Lastly the 7th Ray of Ceremonial Order and Magic rules this sign, giving the Capricorn influence the ability to seek order in the environment around them. Traditional Capricorns are not often the biggest believers of magic, as they are an earth sign and generally need to see it to believe it. Yet this sign is ruled by the incoming 7th Ray, making the time of the Sun’s sojourn through the constellation of Capricorn an important time for us always in the coming age.

After the outer active time of Sagittarius, there is a definite slowing of energy as we enter Capricorn. This, of course, is temporary as Capricorn is a dynamic cardinal sign, so intensity grows, just slowly. By the end of the time of Capricorn, before moving into Aquarius, Humanity is already upon the mountain, climbing the way back up to the top before our spiritual peaks in the signs of Aries to Gemini. And on the cycle goes, each time on a higher turn of the spiral.

It will be interesting to see what this time period brings us, but as next year is 2018 and this, all being told, will be a Master year 11 for the Earth, I imagine that the time of Sagittarius and Capricorn will be one for us to see the vision for the coming year and begin the climb towards that vision. I hope you are as excited as I am, sensing as I do something special coming in the coming year………

Stephen is an Esotoric Astrologer and has a keen interest in the Esoteric line through the Alice Bailey books. Stephen offers astrological readings - - contact him via his Facebook page.
Previous Joy is a Special Wisdom
Next Hummingbirds of La Paz Waterfall Gardens, Costa Rica