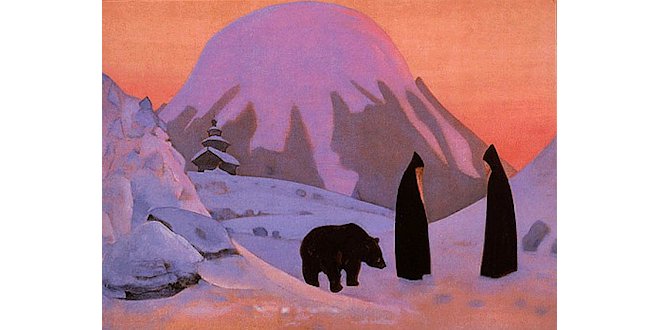 And We Do Not Fear - painting by Nicholas Roerich 1922. Photo: museumsyndicate.com

And We Do Not Fear

In the movie Fly Away Home a young girl becomes a surrogate parent for a brood of Canada geese hatchlings. She even learns to fly an ultralight plane in order to lead and teach them their migratory path – across borders, laws, procedures and regulations – to a safe haven in a warmer climate for a cycle of new life to begin. Together they respond to the deeper calling of nature’s patterns which underlie all life in our beautiful world. They fly above (and beyond) the human-made constraints, conceived as a protective shell for human communities but which become imprisoning as the essential soul flowers into fuller expression and no longer needs to be limited to a lesser identification. The apparent transgressions of regulations which occurred in this endeavour were not just an instinctive rebellion against imposed limitations, but were rather the side-effect of a free response to a sense of the fuller potential of the greater life beating in the hearts of all its creatures.

On the surface these are subtle differences but at the heart they are vastly different in energy import and identification. Varying motives can drive rebellion but at its true heart it is the urge to freedom inherent in every atom – freedom to live according to the rhythm of the Soul and, for the geese, to the seasons of the Sun, the Life and Soul of our system. It is a solar impulse at all levels that overrides any limiting constraints. Often actions from “best motives” intended to act “for the good”, such as those which were attempted to restrain the girl and her geese, can be seen in a larger light to be both limited and limiting. Yet eventually all came to realise that she and her geese were responding to a greater life pattern.

A fresh perspective emerges as we follow the story. Flying at a higher altitude the view extends; larger connections can be seen that expand the heart to embrace what is beyond the familiar; imagination is freed to lift with their flight and share in the heart relationship which unites the geese and the girl. They give us a vision from a higher altitude to reveal an unfolding vista and all within it. The film reminds us that it is time to live from that higher altitude – at the higher, subtler frequency of the heart. A parable from the Agni Yoga writings also calls us to live live life at the summit:

A legend of the Uighurs tells of a giant who captured the Black Dragon and bound him with many chains. The giant left his sister to keep watch on the dragon, and he hurried to the ends of the Earth to announce his victory. But when the giant had reached those distant lands, he heard his sister calling and knew that the dragon was breaking free from the chains. The giant hurried back, but when he saw the seas before him he realized that he would be late if he continued on the same route. So the giant decided to go from one mountain to the next, avoiding the seas, forests, and swamps – that was the only way he could arrive in time. The Black Dragon was breaking free from his last chain when the giant arrived and bound him fast again.
Let us remember this parable and speed along the summits. Moving from summit to summit will make it easier to encounter all those who dwell in different lands and wear different clothes but live by one heart. That is how we shall reach the threshold of the Fiery Gates.” Heart, 599.

Through the girl’s actions, supported by her father and friends, a new way is discovered to bring life back to nature reserves essential to the life patterns of its inhabitants and which bring joy to both animals and humans. As we enter with them into this vivifying inner life we realise that it transcends the regulations formulated to govern both their lives and those of the young geese they save. This pressure against entrenched restrictions may also be seen in the tide of unrest that seems to be sweeping through the surface events of our world.

Often a single voice – small in volume perhaps, but giant in spirit – will clarify the implications of ill-considered decisions or perhaps reveal a new approach

We might observe a rising tension in parliaments and administrative gatherings as previously accepted laws and regulations are called into question. In many instances we find mass demonstrations opposing the decisions of those in government office. Often a single voice – small in volume perhaps, but giant in spirit – will clarify the implications of ill-considered decisions or perhaps reveal a new approach or new understanding that transforms how we think about certain laws or governing ideas and values. Provocative actions arise from a spill-over of inner pressure, and demand that we think through the wider implications. At such times we can respond either with compassion or defensive withdrawal; with understanding and a larger view or with defensive force and conflict; with love or fear; with life-sharing or death and destruction.

And so enlightenment proceeds, revealing darkness and challenging us to a deeper understanding of the forces moving through our world. We are told that natural

Laws are…the unalterable conditions brought about by the activity, the orientation and the emanated decisive thoughts of the One in Whom we live and move and have our being, just as the activities, the orientation and the thinking of a human being carry the cells and the atoms of his body along the line of his wishes. Energies are but the rhythm of His breathing and the results of the systolic and the diastolic action of His heart.” Discipleship in the New Age II, page 62

Our values shift; our identity expands; our focus extends from the little self to life-sharing.

As an increasing proportion of humanity comes under the impress of the Soul, we realise that the right balance in all relationships is integral to the health of the whole. We begin to see things in terms of synthetic wholes. Moving from isolation, we learn interdependence eventually leading to a sense of synthesis. Our values shift; our identity expands; our focus extends from the little self to life-sharing – from selfish acquisition to contributing to and serving our world.

Man-made laws are modes of organising our social experience in the world – to create an ordered existence. They reflect the understanding of the times in which they are formulated but do not grow organically with the unfolding consciousness of human beings with their changing expression in the world. This is demonstrated in that what was previously defined as “intellectual property” can no longer be controlled when many minds may apprehend the same idea at the same time and implement it in diverse ways while the internet provides ready access to all. Attempting to formulate laws to regulate this so called IP cannot contain the explosive creativity pouring through human intellect and into active expression.

…the Laws of the Soul bring a new influence into our presence in the world.

And so the laws of men are temporary at best but we cannot avoid the laws of nature which bring balance, order and clarity to the whole planet. Then, as we begin to recall our identity as souls, the laws of the Soul bring a new influence into our presence in the world. In the Alice Bailey writings we read that:

The Laws of the Soul concern the life of the soul upon its own plane, and the relation which the blending soul and personality learn to establish with other souls and with the Hierarchy [of souls]. These are consciously and voluntarily obeyed, and are not just accepted as mandatory and as forced upon the man by force of circumstances, experience and evolution. They tend to bring about increasing relation between the Hierarchy of Souls and Humanity as a whole, between the great planetary centre which is the custodian of the principle of love and the planetary centre, humanity, which nurtures and distributes the energy of mind.” The Rays and the Initiations, page 157

We can choose which forces we invite through our consciousness: the love of the soul which unites, or that fear for the form which separates.

We can choose which forces we invite through our consciousness: the love of the soul which unites, or that fear for the form which separates. Even fear itself is a response to a lower reflection of love – it is, however, love for the form which is only the temporary home of the true Self. This illusion that we are the form we inhabit can lead one into so many subtle fears which weave barriers between one another, between us and Reality. Fear of losing one’s image, of disapproval, of “failure”, of the loss of any aspect of our physical living to which we are attached (whether we realise it or not). Such fears gather around us through identification with the external forms of life rather than with the essence which is our true being.

For the geese in our story, when the season comes for their return, they all (every last one) find their own way back to the girl’s veranda from which their life journey had begun. And when we “fly away home” to our true and eternal home, fear is no more. This is so subtly yet powerfully expressed in the painting by Nicholas Roerich, “And We Do Not Fear”, depicting the gentle meeting of the human and animal kingdoms. It carries a reminder of mantric power in these times when those who radiate love are holding open the door into a new and so very different world where enlightened vision reveals the subtle connections of things within the weave of the one life we share. Fearlessness, courage and love were the essential attributes of the young girl in Fly Away Home as she cared for her little flock.

Life in all its forms can be revered as the expression of the same great spirit that substands everything. And always it calls us free from the hold of the smaller, temporary identity until, liberated at last, we enter into the country of our true home. As we identify with the heart and, through the heart with all else, we are released into that expansive freedom and lightness of being that brings us into the flow of life – that “life more abundant” of which the Christ spoke, John 10:10 and which brings revelation of a glorious future in a civilisation of the Soul.

…
We shall not cease from exploration
And the end of all our exploring
Will be to arrive where we started
And know the place for the first time.
Through the unknown, unremembered gate
When the last of earth left to discover
Is that which was the beginning;
At the source of the longest river
The voice of the hidden waterfall
And the children in the apple-tree
Not known, because not looked for
But heard, half-heard, in the stillness
Between two waves of the sea.
Quick now, here, now, always–
A condition of complete simplicity
(Costing not less than everything)
And all shall be well and
All manner of thing shall be well
When the tongues of flames are in-folded
Into the crowned knot of fire
And the fire and the rose are one.

Hi, I'm one of a group of authors and editors for the Sydney Goodwill website.
Previous International Year of Light
Next Fly Away Home