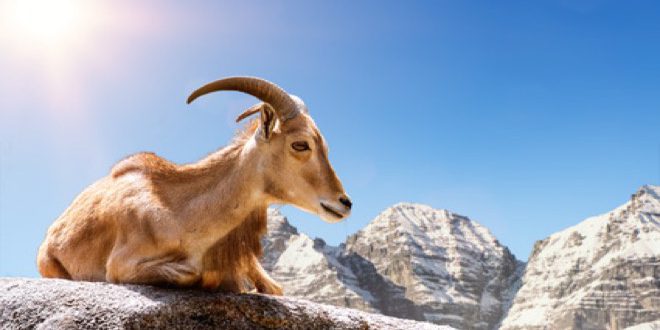 In the book, The Labours of Hercules, page 171, the Tibetan Master is quoted as saying that “Capricorn is one of the most difficult signs about which to write, and the most mysterious of the twelve”. He also goes on to mention that “the symbol has never been correctly drawn, because its correct delineation would produce an inflow of force that would be undesirable at this time”….Such is the strength, power and mysterious ability of this sign that we only really perhaps understand on the surface.

Capricorn rules the knees from a physical body point of view. Alice Bailey writes in The Labours of Hercules, page 172, that “that it is on his knees that the Capricornian offers heart and life to the soul and only then, when self-initiated, can he be trusted with the secrets of life and the higher powers”. This is a sign of humility, hence I think why it is an earth sign. It is also the sign that rules initiation, and it is said that while its polar opposite, Cancer, rules the entrance into Humanity, Capricorn rules the gate outwards into the spiritual kingdom. This leaves us with much to consider….

Capricorn is a cardinal sign and as such brings change and dynamic energy, delivered through the element of earth. Perhaps it is no coincidence that from a western and Christian point of view, we have both the birth of Christ celebrated (whether or not the date is correct) and also the start of the New Year. 2 big landmark dates for the year are celebrated with in a week, both in the time of the sun’s sojourn through the energy of Capricorn. The universe seems to leave nothing to chance so I think this is again an example of the law of Economy at work, using the energies available at the maximum time to enhance the energies of the Christ.

The lower mantram for Capricorn is – Let ambition rule and let the door stand wide…This shows the ability of Capricorn energy to be ambitious, which is a needed trait to climb the mountain. The fact that Capricorn is an earth sign brings it easily into being materialistic, especially for Humans. Yet always the challenge for all of us is to be open to the higher calling of the energy available, to go past the surface, go inwards and deeper and contact the higher, more evolved aspects of the Capricorn energy and use that ambition and drive towards overcoming our own mountain.

The higher mantram for Capricorn is one of the most significant – Lost am I in light supernal, yet on that light I turn my back. Showing a glimpse of the mysterious power of Capricorn, once a disciple has climbed their own mountains, reached the peak and basked in the glow of the spiritual kingdom that this sign allows us entry to, he hears the cry of his brothers and sisters and heads back down the mountain to serve Humanity, this time from the Soul.

Often during the time of Capricorn we have a slowing down, a time of inner reflection, time for family, for rest over Christmas, holidays. This is needed as we take stock and celebrate the year of achievement. During this time, on conscious mind levels and subconscious, there is a taking stock, an inventory. Then as we approach the New Year, new goals are set, both from a personality point of view and a spiritual. We put in place our next steps and gaze up at the mountain and start a new climb, either on the same mountain or on a new one. Hence we begin our climb anew, heading upwards again.

In the astrological wheel, Capricorn rules the 10th house, that of public expression and career. It sits on the midheaven, the top of the chart. Imagine a hot summer day and the Sun at its highest peak, this represents Capricorn. Perhaps the more we understand this sign, the closer we will get personally and collectively to both our own peak and that of our Human and spiritual potential….

The major aspect of this chart and perhaps one of the most significant, is a grand cross, involving Jupiter/Uranus both in opposition, plus the Sun/moon opposition squaring them both. This forms a particularly potent aspect and forms a grand cross, made supercharged as it is all in the cardinal signs. Generally there is a slow build-up of energies from Capricorn up to the spiritual peak of energies in Aries, Taurus and Gemini. With this grand cross hitting us so early in 2017, and with this year being numerologically a 1 year 2+0+1+7=1, changes are afoot it seems. It is almost like the energies are saying I won’t be waiting, let’s get going straight away.

With the personal Sun and moon involved, this will challenge us completely I think. Full moons often bring challenge anyway as there is heightened energy, but throw in a grand cross that involves the wise all-knowing Jupiter and the occult and freedom-loving Uranus, all in cardinal mode, then sharp and sudden change is afoot. This aspect won’t last too long, but I think its impact will shake us into 2017 and we will certainly be aware of its presence.

There is still a strong band of energies in Pisces, with Chiron, Mars, Neptune, Venus and the karmic south node all visiting there. Collectively they all oppose the north node in Virgo. It will be interesting how that plays out, as having all of those energies in Pisces will really give us access to the spiritual and universal realm, yet our dharma is in the opposing Virgo. One would think that with changes evident, the old Piscean age energy rooted in the past will rear its head. Perhaps we missed something (probably a lot) and it’s there almost as a review to say you missed the lessons on that. Either way we should continue to be open to the spiritual realms as the energy will be present.

The Sun as I have mentioned is in Capricorn, with Pluto 5 degrees out keeping it company. Pluto being the planet of transformation, death and rebirth, it will be interesting to see what happens. They will be both in the 5th house at the time of the full moon, suggesting that the energy will be fun, creative but also shining and on display, as it is the Sun’s natural house and we cannot miss the Sun, unless the Earth is covered in cloud……

Layering this chart, from the ascendant, is Virgo. This gives the chart a lot of earth influence as both it and Capricorn are earth signs, suggesting the anchoring of the new. Virgo will influence the birthing of the new and also give us a great ability for discrimination, perhaps needed for whatever we are going to experience.

It seems like we will have an early chance for initiating change on personal and global levels. Welcome to 2017.
Share

Stephen is an Esotoric Astrologer and has a keen interest in the Esoteric line through the Alice Bailey books. Stephen offers astrological readings - - contact him via his Facebook page.
Previous Children Develop REAL SuperPower (Third Eye)
Next William Meader returns to Australia Feb & Mar 2017