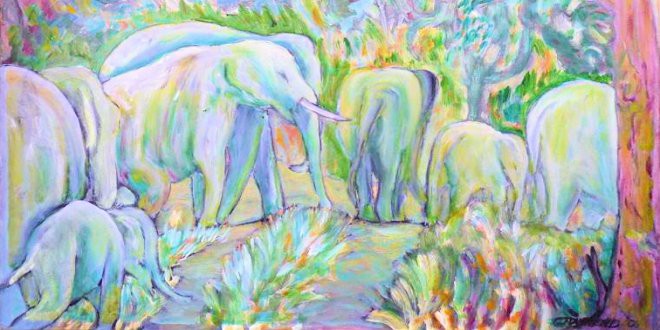 Image adapted from a painting by Christine Townend

Heart in One is Heart in All

In the BBC Documentary, ‘Echo: An Unforgettable Elephant’, a story unfolds of the wise and beloved matriarch of an elephant family. Through all the vicissitudes of life and death she leads, holding the threads of an unbreakable web of relationship through which love flows and wisdom is transferred. It is a living web we call “family” and is deeply and indelibly embedded in our essential being. The scientists and observers who filmed and monitored Echo and her family over 40 years also became part of that loving family in their own way – indeed how could they not as heart calls to heart? The elephant world may appear on the surface to be vastly different to the human yet we still find at heart the same great simplicities of life and service to the whole through love. This beautiful and illuminating documentary can be seen via the internet at:
https://www.youtube.com/watch?v=c10IkvflaTo

Family is something so familiar that we can all too readily just assume it as with all the subtle framework in which we live. And it can be so accepted that we may not see the subtle shift taking place in what it means for us through the unfolding of time and identity. While many families are created through the traditional lines of marriage and the birth of children, many now are created intentionally through adoption, surrogacy or through a sharing of deep life trauma such as war and natural disaster. At the same time many “traditional” families are fragmenting or becoming dysfunctional through divorce, domestic violence and other abuses previously hidden behind the façade of the outer family structure.

What is the essence of family? At a vaster level we speak of the human family. And increasingly this idea is permeating and changing how we relate and identify ourselves. The organic network of relationship we call the human family extends our range of involvement, responsibility and obligation. A code of human values has emerged expressing through such frameworks as Human Rights and in international codes of conduct. This greater sense of family challenges all the lesser concepts that underpin the human urge to relate, congregate and form community. It is beginning to transcend all previous barriers based on blood relationship, class, culture or national sovereignty.

A sense of family provides lineage or continuity through time, and expanded identity or a sense of group which extends familiar space. It connects us into a greater life and opens the flow of life-sharing that is the hallmark of the Soul, an identity shared through the diversity of incarnated lives.

Ultimately we are related to the planet itself. Our bodies are formed of its substance and sustained by all the kingdoms in nature

Ultimately we are related to the planet itself. Our bodies are formed of its substance and sustained by all the kingdoms in nature – mineral, plant, animal. Together with all others, we think and feel within the fluid realms of thought and feeling – riding the currents as they are communicated through the networks of relationship we have created from out of our own substance. It is a renewing and sustaining flow of life that raises up forms and eventually calls them back into the great reservoir of substance. And always, always, progressing and expressing more and still more of the potential of the planetary being, the One in Whom we live and move and have our own being. Always the death of the form and always the release of the life within the form and the resurrection of the substance of the forms into more suitable raiment for the light of the Soul and the power of the Spirit within to bring us to the ultimate relationship within the whole of Life.

An experience which touches this is described by Edward Thomas:

I knew that I was more than the something which had been looking out all that day upon the visible earth and thinking and speaking and tasting friendship. Somewhere close at hand in that rosy thicket or far off beyond the ribs of sunset I was gathered up with an immortal company, where I and poet and lover and flower and cloud and star were equals, as all the little leaves were equal ruffling before the gusts, or sleeping and carved out of the silentness. And in that company I had learned that I am something which no fortune can touch, whether I be soon to die or long years away. Things will happen which will trample and pierce, but I shall go on, something that is here and there like the wind, something unconquerable, something not to be separated from the dark earth and the light sky, a strong citizen of infinity and eternity. The confidence and ease had become a deep joy; I knew that I could not do without the Infinite, nor the Infinite without me.” From The Stile in Light and Twilight by Edward Thomas

We are reminded that death is a false appearance that hides the spirit onward moving in life.

Family forges the heart-strings that draw us onward and even through the veil of death until we have realised the glorious and eternal communion of the brotherhood of man that is not limited by death. Jesus Christ spoke of the Father and His words resound with the implications of deep familial relationship: “I ascend unto my Father, and your Father; and to my God, and your God” [John 20:17]. We are reminded that death is a false appearance that hides the spirit onward moving in life.

So died, according to theological injunction, the Christ upon the Cross. Yet He died not, and still lives, and by His life are all souls saved.” The Rays and the Initiations, page 105

The pain of physical loss can open the heart to a greater reality – if we allow it to flower into those lighted vistas. So often we impose our, as yet, limited understanding on those who have grown beyond it. The Tibetan Master explains how the personal grief of the apostles at the Crucifixion hindered their progress in realisation:

The Master Jesus on the Cross could not respond to any saving process… As an adept and as one in whom monadic consciousness was firmly established, the powers then available to Jesus could not be used in the saving of His physical body. At the same time, it must be remembered that He would have no desire to save it, because He now possessed the power (demonstrated later in the Gospel story) to create a body at will in order to meet His needs. The subtle and subjective sin of the apostles was that they were not interested in evoking the living activity of the Master on His Own behalf (even though He would never do so: this they did not know), but were entirely preoccupied with their own grief. The evocation, had they attempted it, would have been useless, but the good that might have come to them and the revelation they might have received as to the deathlessness of the soul would have greatly illuminated them and might have produced a Christianity built around a living Christ.” Esoteric Healing page 654

There is much in the world that could give rise to grief – much pain, suffering and desolation. There are also many of our human family rising to respond through various ways of approach: seal off the heart from suffering and study its causes and conditions; engage in alleviating suffering, allowing the heart to remain open and responsive to pain; transmute personal pain into light by treading the path of spiritual transformation and so become a force for transfiguring the world.

There are those who have inspired us down the ages by transmuting their pain into light and radiating its transformative power through their being, presence and actions in the world. The wise elephant, Echo, knew when her daughter was dying from a wound and stayed near as long as possible. Yet she also knew it was critical to take her daughter’s little son to where he would have suitable food. With extraordinary greetings / farewells of love for her daughter, she left with the family in order to sustain them and their lineage – returning later with them all to take much time to acknowledge, express love and reverence at the site of the carcass that remained.

In the depths of world despair we may lift and aid all who suffer by following Christ’s example, so that we ourselves might pass through our own human nature to the Soul as it reflects the love of the Father, of the Spirit, of the Life that initiates the birth of all and recalls them to His Heart in the joy of achievement. As the Tibetan Master asks of a disciple:

Have you ever thought, my brother, that just as there is a discipline of pain and of sorrow, there may also be a discipline of joy and of achievement? This is a thought worthy of attention. Men need these days to learn this new truth, and its perception will greatly change human consciousness. That which is bliss is today here or on its way, and the disciples and aspirants of this present time must be taught how to recognise and implement it. …this is a right which you have definitely earned.” Discipleship in the New Age II page 671

“He who does good comes to the temple gate,
he who loves reaches the shrine.”

Hi, I'm one of a group of authors and editors for the Sydney Goodwill website.
Previous GRATITUDE by Louie Schwartzberg
Next Three Spiritual Festivals