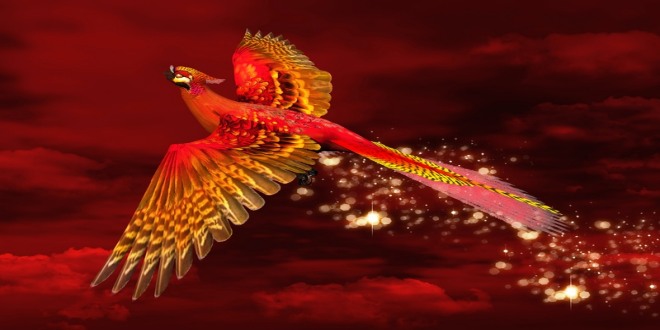 Actual Full Moon: Thursday 25th Oct 3:45 am  AEST
Keynote: Warrior I am and from the battle I emerge triumphant.

Scorpio is a sign that can often be associated with death and the darker things in life. Death has many connotations, depending on one’s beliefs on a variety of things – including God, religion and the existence of an afterlife. The one constant with death is there is something that always dies off, whether that be the cells in a person’s body, or if we widen our horizon, their current body used in this life.

The same rules can apply for many things in our lives. If we start a business and it does not do very well and at some point has to close, it experiences a death. The same can be said for the myriad of relationships that we have had in our lives, besides some that seem to last for a lifetime or parts of a lifetime, relations form and die off all the time. Our bodies have cells that die every second and which are replaced all the time. It is in a constant state of flux of beginnings and endings. The essence here is the beginning of something, the process and life of it, then the death or closure of it. Over and over this cycle repeats, throughout all systems of life.

Scorpio was said to be ruled by Mars, until Pluto was discovered. Once Pluto was discovered it was then assigned to Scorpio as the ruler. If you sense the true essence of Pluto, you would think that it feels right to be the traditional ruler of Scorpio. Pluto is out in the depths of our solar system.  It is the furthest planet in distance (astronomers call it a dwarf planet), way past Uranus and Neptune. Like Hades who rules the underworld, Pluto stands out on the edge of our system, out in the darkness, linking us and the bigger Milky Way galaxy.

When the Tibetan Master gave us so much new wisdom through the books by Alice Bailey, he said that Pluto is ruled by Ray 1 – the Ray of Will and Power. He mentions in the writings that while Vulcan uses more of the Will aspect, Pluto uses more of the Power aspect, using it as the destroyer. Though destroyer is a strong word, from my understanding, I believe it means the power to end that which no longer serves, though of course people down the ages, including now, still misunderstand this.

Scorpio has quite a few symbols attached to it. The most known is, of course, the scorpion, waiting in its lair to strike with its tail, when wounded or challenged. This, of course, is a useful thing, as we often perform our best when we are cornered and need to fight. The reason for this is that it calls on powers that we did not know existed, or which have lain dormant within us. Unfortunately, we have all experienced some of the more negative Scorpion energy at some point in our lives, whether it was us ourselves or from another, and we used this fight to project onto others.

The phoenix is another higher symbol attached to Scorpio. This is the one that probably explains it the best. I always remember Dumbledore’s bird, Fawkes, in the Harry Potter movies. Once he got old, he incinerated, then was reborn into a new young bird. This is a perfect and apt description for the energy of Scorpio. All things age, get old and then need to be reborn in one way or another. It is an energy which is very much aligned with transformation.

The higher mantram for Scorpio is “Warrior I am and from the battle I emerge triumphant”. It is a good idea to sit with this mantram for a bit and really take in the meaning of the words. Part of the reason for this is it is said that Scorpio rules the discipleship path. Many people are entering a period in their evolution where parts of their old selves are dying off, things that they have held onto for many lifetimes, and, due to corresponding energies from cosmic forces, they are taking real leadership of themselves, or are at least trying to. They are beginning, or are on, the discipleship path.

To know that you are a warrior and that you are doing battle with your own shadow self, also the accumulation of a greater shadow created by us all (think environmental problems, collective greed, issues of humanity), is a great thing. We all want to be free, it exists within all of us at varying levels, because we are all one at the core. Isn’t it comforting to know that even though you battle through something, from the battle, you will emerge triumphant…..

Here is the energy of Scorpio. Use it to go within, to battle the darker sides of yourself and to eventually emerge triumphant. That is one of the gifts of Scorpio. There is also the opportunity to use the energy to kill off or destroy the things in your life that are old and are no longer needed, then to rise anew like a phoenix…..

The chart at the time of the full moon in an interesting one. There is plenty of activity in Scorpio, with four planets and the Sun all there. The energy will get Scorpionic (meaning intense and perhaps somewhat psychic) quite quickly, a bit of a change from the seemingly peaceful Libran energy. Opposite this heavy Scorpio focus will be the Moon and Uranus in opposition in Taurus. What will this mean?

When the Moon is next to Uranus at the Full Moon it can mean a seeking of freedom from emotional ties. It is almost like there is a collective attempt to break through the astral fog that we are all collectively associated with. This is never easy though, especially in Taurus (where the Moon will be) as it does not generally like change, unless stirred to it. What is stirring us currently, what do we need to change within ourselves and just as importantly, within the collective….?

With the Sun in Scorpio, expect a delving into your own inner psyche, with heightened and intense feelings (Scorpio is a water sign). Feelings intensify, slowly at first towards the mid of October, then more quickly as the Sun enters Scorpio. This emotional intensity draws us in and actually allows us to be more aware of our surroundings, an important gift but one that can seem overwhelming.

Interestingly and perhaps little known is, that the Tibetan Master told us that Scorpio is ruled by Mercury on the Hierarchal level. Anyone who has studies astrology would not perhaps marry Scorpio with the mind-expanding energy of Mercury, yet there it is. For over a week, from the 24/10 to the 2/11, you will have the Sun and Mercury, the Hierarchal ruler, both in Scorpio. I get the sense that it will be a very compatible time for using expanded mind abilities that you might or might not be aware that exist within your psyche. Use that time to meditate deeply, going within and allowing your subtle perception to guide you…..

There is a grand square at the time of the Full Moon, pulling in the Sun/Venus – Uranus/Moon opposition, plus the North and South Node. With the Nodes there and everything in either opposition or being squared, I expect some major challenges to be worked out. They are all in fixed modes, so there will be an issue of not moving freely or being either stuck in the past or stuck on what is said to be the best for the future. As Scorpio is the predisposing energy, expect a battle of some sorts, yet expect to emerge triumphant from the battle.

The ascendant of the chart is Virgo, suggesting a need to purify and cleanse the environment around us, including mentally and emotionally. Virgo will bring in a strong earth element, to prevent us from going too deeply into the realms of the inner psyche. It will also bring in a strong feminine aspect, with the Mother of the World guiding us in our doings….

Isn’t it a great time to be alive?!

Stephen is an Esotoric Astrologer and has a keen interest in the Esoteric line through the Alice Bailey books. Stephen offers astrological readings - - contact him via his Facebook page.
Previous Journey of a Lifetime: A Group Story – Chapter 9
Next Hilma af Klint 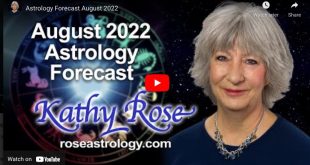 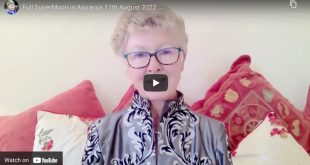 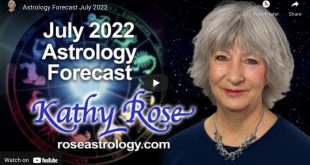 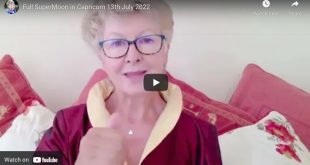 In this 30-minute video, Pam talks about the first half of July, the Full SuperMoon …