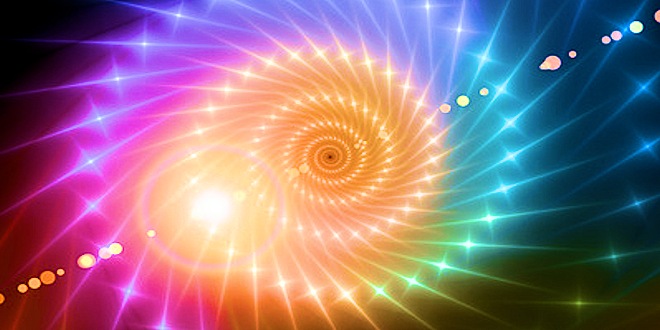 The Essential Radiance of Life

We’re probably all familiar with sayings such as “a man is known by the company he keeps” or “birds of a feather flock together”. Yet even in these ordinary expressions we find reflections of Life principles, those undeniable laws and forces which guide the evolutionary process of all we know. It is true that everything is energetically drawn to the radiatory note with which it resonates because of similarity of sound or vibrational frequency: “like attracts like.” And, in turn, everything is radiating its own “note” and attracting others of similar resonance. A great radioactive process is underway throughout the universe, the solar system and this world in which we live and move and have our being.

The same great breath breathes life into everything and invigorates growth into what is finer and more like the source which vitalises it and from which it comes. Looking through time we can discern the underlying pattern of Life unfolding through our world, in all its layers and dimensions of being, a great process of ordering by resonance, of refining and of expanding into expression. We might discover that, at its core, Life is stable, a point of dynamic being, but its impact on matter renders it “radioactive”. Depending on how we look at it – from the outer form inwards or from the inner life outwards – the radioactive process might be seen as either destructive and divisive or progressive and synthesising (fission or fusion). Science tells us that:

Radioactive decay is the spontaneous radioactive disintegration of an atomic nucleus, resulting in the release of energy. Some atoms are stable while others are unstable and decay, emitting radiation to achieve a stable state… when an atom decays it turns into another…form, in a process called transmutation… One example is uranium-238 which, through the process of radioactive decay, will eventually become a stable isotope of lead. However, this process takes billions of years.” Australian Nuclear Science and Technology Organisation

From the perspective of the inner spark of life which animates the form, we are told that:

Radiation is the outer effect produced by all forms in all kingdoms when their internal activity has reached such a stage of vibratory activity that the confining walls of the form no longer form a prison, but permit of the escape of the subjective essence. It marks a specific point of attainment in the evolutionary process…”

“…we are dealing with the effect produced by the inner essence as it makes its presence felt through the form, when the form has been brought to a stage of such refinement that it becomes possible.”

“…Radiation comes about when the internal, self-sufficient life of any atom is offset by a stronger urge, or pull, emanating from the enveloping greater existence of whose body it may form a part. This is nevertheless only true when it is caused by the pull upon the essential life by the essential life of the greater form; it is not due to the attractive power of the form aspect of that greater life. A very definite distinction must here be made.”

“…the essential life of any atom, its highest positive aspect, is ever of the same nature as that of the greater life which is drawing it to itself.”

“…The liberated essences become conductors of the greater force which is their magnetic centre, because they are responsive to it… Every radioactive atom becomes, through this conductive faculty, a releasing agent; and they consequently cause what we call burns.”

“…When this realisation is applied to all the forms in all the kingdoms, it will be found possible to bridge the gaps existing between the different forms of life, and the ‘elements’ in every kingdom, and those unifying radiating centres will be found. The word ‘element’ [in its]…correspondence…is to be found in every kingdom in nature, and there are forms of life in the vegetable kingdom which are occultly regarded as ‘radioactive,’ the eucalyptus tree being one such form. There are forms of animal life equally at an analogous stage and the human unit (as it approaches ‘liberation’) demonstrates a similar phenomenon.”

“…about the fourteenth century the human kingdom began to be noticeably radioactive, and we are on the way to the fulfilment of a…period of transcendence of a still greater activity than in the time of the Buddha. It will become demonstrably great when certain conditions have been fulfilled.” A Treatise on Cosmic Fire, from pages 1060 to 1079

Science also tells us that:

Radiation is energy that travels as waves or particles. Heat, light, sound, microwaves, radar, radio waves, X-rays, alpha and beta particles, and gamma rays are all forms of radiation.”

Our growing understanding of radiation has enabled us to harness and direct it and to apprehend the Life principles that substand it. We, in turn, are changed through our own creation. From the moment that mass media began to encompass the globe and man walked on the moon, relaying images of Earth from space through living human eyes – from that moment human consciousness has been accelerated in its trajectory into wholeness, Oneness. The beauty of our world as a whole burst upon the human heart and ignited a greater love than any previously known – love of the whole of which we are a part. Essential life drawn to essential Life.

Since then, documentaries about the natural world and global human issues have been flashed around the world, drawing the kingdoms in nature and all of humanity inexorably into a synthesising heart-embrace. We realise that we are part of the one humanity and the one world, and that the very substance of our bodies is comprised of the mineral, plant and animal kingdoms which we permeate with our consciousness. Thus we participate in the substance of the world and our consciousness encompasses it all, ever expanding its range into the greater life.

Our realisation progressively transforms us right through to the atoms that comprise our vehicles.

Our realisation progressively transforms us right through to the atoms that comprise our vehicles. We have harnessed extensive radiatory power and light in order to weave wholeness – we are both initiator and subject, to the point where we find there is no distinction between that which acts and that which is acted upon.

We are changed by the very change we cause: the healer heals himself, the teacher learns, the investigator finds himself.

And so light not only clarifies what we observe, it also en-lightens us, changes us. It is transformative. The effect of revelation brings an experience of becoming lighter, finer. As light changes perception it consequently changes the vibratory rate of the vehicles we inhabit and animate. We vibrate to a finer and finer frequency until we no longer resonate with what we once did. We see further, perceive subtler things and are in turn energised by a more subtle living.

Revelatory light floods our being and our very substance is changed as its range of resonance expands into subtle realms of causal being. What previously held it within the “ring-pass-not” of material living no longer holds and it is released into a greater, more potently radiatory and magnetic “lifescape”. Thus we build a new world out of our own substance – that substance which has been attracted by our own radiatory force. And the source of that force is the same essence we share with all, the same divine spark.

As we radiate a finer and more powerful light, our silence becomes more potent than our speech.

As we radiate a finer and more powerful light, our silence becomes more potent than our speech. We listen less to the “internal dialogue” of the persona we inhabit, as it constantly repeats its view of itself in the material world in order to hold our energy centred there. We find instead that we are listening for what is yet to unfold and we no longer remain contained within previous knowledge and its thought patterns. We are silencing the voice of the old gods in order to hear what is ever and eternally sounding through the heart of our true being. And as we do so, we radiate the light of our own transformative process, participating in the enlightening of our world and the redemption of its substance.

You know about the influence of human emanations on plants, and you also know about the influence of color. Now it is necessary to recall the significance of sound. The similarity of these various influences is quite remarkable. Since an open, brightly resonant heart is needed to increase the potentials of a plant, then when it comes to the influence of sound, consonance and all the combinations of the dominant tones are necessary for the same purpose. A manifestation of dissonance cannot strengthen the flow of energy. Dissonances may be useful in the way they affect people, for as an anti-thesis they can reinforce the rhythm of consciousness; but with plants, where consciousness is minimal, dissonance is only a condition that retards growth. With minerals, dissonance may be a source of disintegration. Truly, a rose is a symbol of consonance, and the dominant chord of the rose’s radiation is linked with the glow of the heart. Few experiments have been conducted on the effect of sound on plants, but the ancients believed that the finest flowers grew by the temples, where the harmonies of voice and music often rang out.”Heart, 66.

Hi, I'm one of a group of authors and editors for the Sydney Goodwill website.
Previous How whales change climate
Next Sun In Cancer Moon in Capricorn