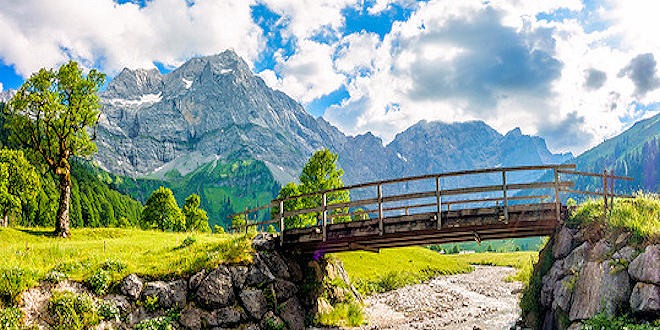 A Bridge in Consciousness

As one opens to this beautiful world, one can see a mighty heart at the core of Life that beats throughout and brings healing renewal to every wound.

If we listen deeply enough we can hear the first notes of the coming Age of Light already sounding throughout the world. They remind us that we have been given such a beautiful world in which to learn and grow. Even the impact of the most limited vision cannot destroy the inherent beauty, life and presence which shines through even the worst degradations like flowers rising up to bloom through old battlefields. As one opens to this beautiful world, one can see a mighty heart at the core of Life that beats throughout and brings healing renewal to every wound. It reverberates in each open human heart that radiates life-giving, nurturing care even in the direst situations. These caring hearts are the ones anchoring the new era. They are all around the world and in every walk of life. And they are becoming more visible to eyes longing for the water of life to quench the desert places where the heart has been slow to open.

Perhaps the most inspiring recent example is the coordinated international effort to rescue the young Thai footballers trapped in an unknown cave by rising flood waters. A new era of human living was demonstrated when the power of the human heart held off the weather, found the unreachable and brought them out to light and life just before the pumps failed and the rains returned. An insightful article is available at: https://www.theguardian.com/commentisfree/2018/jul/10/rescue-thai-cave-boys-bravery . It ends with these portentous words:

As the world fragments, here good people have got it together. The boys will still need much help. I know that trauma does not evaporate with news coverage. But what we have seen was not a random act of kindness but a model of international cooperation and coordinated selflessness. This is how human beings can be, and it has been magnificent. The boys have been freed by bravery, incredible expertise and a word that I am scrabbling for and can now, finally, use: love.” Suzanne Moore – The Guardian

In fact the Kingdom of Souls has always been “hidden in plain sight”.

The whole world is both preparing and being prepared to welcome Those who will come into visibility to usher in the New Era so urgently needed to bring an end to the eons of pain and suffering – the long birth pains of a sacred planet. Through the millennia, wherever there has been resonance, the Inner Government of the planet has made its Presence and influence felt and the portal for Their visible appearance is within us all. In fact the Kingdom of Souls has always been “hidden in plain sight”. The Tibetan Master explains:

… the progressing disciple does not move into new fields or areas of awareness, like a steady marching forward from one plane to another … What must be grasped is that all that IS is ever present. What we are concerned with is the constant awakening to that which eternally IS, and to what is ever present in the environment but of which the subject is unaware, owing to short-sightedness. The aim must be to overcome the undue concentration upon the foreground of daily life which characterises most people, the intense preoccupation with the interior states or moods of the lower self which characterises the spiritually minded people and the aspirants, and the imperviousness or lack of sensitivity which characterises the mass of men. The Kingdom of God is present on Earth today and forever has been, but only a few, relatively speaking, are aware of its signs and manifestations. The world of subtle phenomena (called formless, because unlike the physical phenomena with which we are so familiar) is ever with us and can be seen and contacted and proved as a field for experiment and experience and activity if the mechanism of perception is developed as it surely can be. …The subjective realm is vitally more real than is the objective, once it is entered and known. It is simply…a question of the acceptance, first of all, of its existence, the development of a mechanism of contact, the cultivation of the ability to use this mechanism at will, and then inspired interpretation.” Telepathy and the Etheric Vehicle, page 53-4

We are the essential bridge into the New Era. This is a bridge in consciousness… We are the ones we’ve been waiting for.

The future of our world unfolds through us. At this point in its unfolding we are beginning to live the Age of the Soul into being – to breathe its “atmosphere” into the world, an atmosphere of love, clarity, truth and divinely inspired free-will. By breathing it in and radiating it out through our presence in the world, we become conscious living souls – in communion with the Kingdom of Souls while anchored in the world of form. We are the essential bridge into the New Era. This is a bridge in consciousness, a pathway of cooperative recognition by which our Elder Brothers may effectively guide human living in preparation for the visible appearance of the Inner Government of the world, the Kingdom of Souls, to open the way for a new civilisation of the Soul in full expression. We are not passive observers or recipients, but are actively immersed in this great chain of consciousness. We are effective to the degree that we are consciously living it into expression. We are the ones we’ve been waiting for.

We have now to trust the heart to serve as compass

As transitional intensity mounts, the urgency of the times is stirring human hearts and minds and opening their creative power to a new and vastly different way of living together. This is not just a “next logical move” in a known direction. It is a complete turnaround of the upward spiral into a more refined state of being and expression that is inspired by the wholeness of the Planetary Life. In the past, an era in the evolution of the race meant another advance in a sequence, each unfolding from the one before. Now it means a forward thrust into a world as yet unknown. We have now to trust the heart to serve as compass, the soul as navigator, and to stand with our enlightened Elder Brothers to help Humanity find its way home.

Yet as our hearts open we realise that we live in the embrace of a beautiful world which supports and teaches us how to weave the heart-bridge between the Kingdoms and between the unfolding eras.

The challenge of still living in the old and passing civilisation is the legacy of its expectations of us and our patterned response to them. Yet as our hearts open we realise that we live in the embrace of a beautiful world which supports and teaches us how to weave the heart-bridge between the Kingdoms and between the unfolding eras. Every Kingdom in nature nurtures us in a reciprocal flow of life, love and light. And the animal kingdom can teach a love unconditioned by expectation as the poet, Rabindranath Tagore, writes:

Every day in the early morning this faithful dog
Sits quietly beside my chair
For as long as I do not acknowledge his presence
By the touch of my hand.
The moment he receives this small recognition,
Waves of happiness leap through his body.
In the inarticulate world
Only this creature
Has pierced through good and bad and seen
Complete man,
Has seen him for whom
Life may be joyfully given,
That object of a free outpouring of love,
Whose consciousness points the way
To the realm of infinite consciousness.
When I see that dumb heart
Revealing its own humility
Through total self-surrender,
I feel unequal to the worth
His simple perception has found in the nature of man.
The wistful anxiety in his mute gaze
Understands something he cannot explain:
It directs me to the true meaning of man in the universe.
~ Rabindranath Tagore

We may yet be in the old world, but we are increasingly participating in the creation of a glorious new world. And as we listen for the heart-song of the new era we draw it into being through our open hearts.

Hi, I'm one of a group of authors and editors for the Sydney Goodwill website.
Previous A Beacon to Dispel the Dark
Next O World Project Interview – Science to Sage eMagazine – Karen Elkins