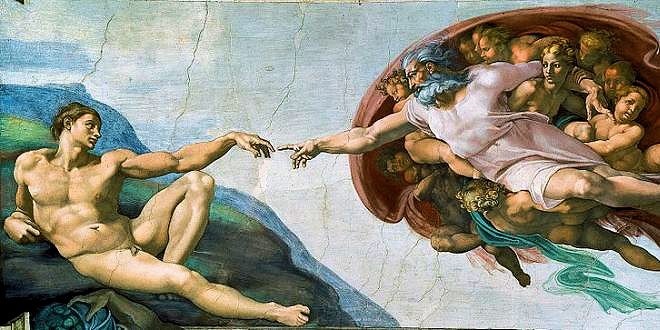 Creation of Adam by Michelangelo Buonarroti (circa 1511) - Photo: Wikimedia Commons

Immersion in a Realised State of Being

In this festive season when gatherings of family and friends seem to be the order of the day, how often are such meeting points arranged? It is that time, at the end of one year and the start of a new one, when we feel drawn together to share that moment of meeting between memory and anticipation, old and new, the known and the unknown; where the smallest and the greatest share a point of being and focus; and where the highest and the lowest, spirit and matter, meet. Such meeting points, if one is open to their potential, are where right relationship is found and where the totality of the greater life is shared. They are where dynamic life bursts into radiant being – perhaps for only a brief moment, and yet a moment wherein all that comes together in that instant is transformed.

The light is brighter when projected from many different directions at once onto the one moment.

At this point in time much is coming together. There is a meeting of the outgoing Piscean Age and the incoming Aquarian energies; we are just 15 years into a new century and a new millennium; and we are in the cusp of a New Year. The light is brighter when projected from many different directions at once onto the one moment. And so we see more clearly in that light what is opening up and leading us into a better world and what can no longer journey there with us.

The meeting point is where everything comes together – where synthesis is entered and the magic of creation holds sway. The eighth of the fifteen rules for magical work described by the Tibetan indicates the power of the meeting point of dimensions and their energies:

… Let the magician guard himself from drowning at the point where land and water meet. The midway spot which is neither dry nor wet must provide the standing place whereon his feet are set. When water, land and air meet there is the place for magic to be wrought.” A Treatise on Cosmic Fire, page 1014

Here the fluid astral realm of emotional energies meets the physical world of “land” and the pervasive world of the thinking mind. Yet the creator stands in none but at their meeting point where inspiration forges the synthesis of all three – and thus the magical work of creation is achieved.

The Tibetan also describes creativity in this way:

The expression of the creative faculty is radiation and magnetism. These bring to its possessor the material for creation and a magnetic capacity which arranges in due form and beauty that which radiation has evoked. Creativity is a consequence of a particular state of mind and a specific state of being. …Love induces that radiation which invokes and evokes not only the heart of God but the heart of humanity also. Love is the cause of all creation and the sustaining factor in all living.” Discipleship in the New Age, Vol II, page 540 -541

Can we envisage a new civilisation wherein love is the magnetic impulse of all creation? Along loving links may flow that deep understanding which draws all into a shared sense of being and its resultant living expression in the world. Such an exulted state may be what is described by the Tibetan as:

… ‘immersion in a realised state of Being,’ because [one] is a conscious aspect of that of which he forms an integral part.” The Rays and the Initiations page 723

Thus an apparently small event may reflect the greatness of the whole of life. This was so beautifully illustrated in that wondrous moment when astronaut Neil Armstrong took his first step on the moon and spoke those memorable words: “That’s one small step for [a] man, one giant leap for mankind.” Adding to the significance of this moment was that it was shared around the world via television and radio. Millions of people were seeing and experiencing as one – dissolving all boundaries of country, nation or race.

The point of conclusion of all past efforts and cycles is also illustrated by the mountain top where heaven and earth symbolically meet – earth at its highest and heaven at its lowest vibrational refinement. Thus is reflected “the tremendous assertion of H. P Blavatsky that:

Matter is spirit at its lowest point of manifestation and spirit is matter at its highest.’” The Rays & the Initiations, page 264,

And so the Earth is created through the inspiration of Spirit as it pervades and animates all the dimensions of matter from the finest to the densest – and yet remains essentially Life itself.

Having pervaded the whole of the universe with a fragment of myself, I remain” Shri Krishna states in The Bhagavad Gita.

…it is realised that there is no identity apart from universality and no appreciation of the universal apart from the individual realisation…” The Rays & the Initiations, page 106

Only Truth can survive in that lighted space where all is visible.

Strands of ideas will weave together, magnetically drawn by similarity of vibrational rhythm and resulting in shared harmony of thought and creation. Such relational links of lighted love form the currents of thought-flow, and telepathy will reveal what may currently be hidden. Only Truth can survive in that lighted space where all is visible. We will find and dispel our own hidden false assumptions and unfair values that hide in the darkness of forgotten corners of mind and patterns of feeling response. Such a lightening of burdens that become as feather-weight as air; such uplifting sense of joy; such shared, purposeful Being!

And, despite the simple satisfactions and limiting fears of the material world, our essential being knows this new world and all its potential for a dynamic peace and an exquisite beauty beyond anything we have previously known. We are told that:

The Mysteries will restore colour and music as they essentially are to the world and do it in such a manner that the creative art of today will be to this new creative art what a child’s building of wooden blocks is to a great cathedral such as Durham or Milan.” The Rays & the Initiations, page 332

It is closer than a breath, nearer than a thought and has already quickened in the womb of time. For it comes, from where time and form are not, to initiate its own unfolding and carry us with it in “trailing clouds of glory”.

Our birth is but a sleep and a forgetting:
The Soul that rises with us, our life’s Star,
Hath had elsewhere its setting,
And cometh from afar:
Not in entire forgetfulness,
And not in utter nakedness,
But trailing clouds of glory do we come
From God, who is our home:
Heaven lies about us in our infancy!

Hi, I'm one of a group of authors and editors for the Sydney Goodwill website.
Previous Molecular Visualizations of DNA
Next Capricorn Full Moon