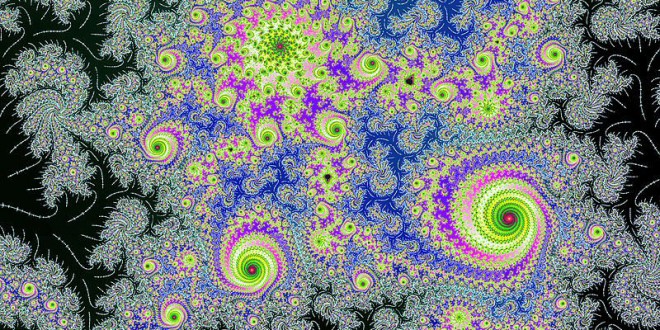 Mandelbrot Islands of Consciousness
Image made by: David R. Ingham

From Physical Geography to Focus Points in Consciousness

How easy it is to appreciate our world when we find ourselves in natural surroundings where the harmony and living splendour of the planet surpasses any man-made landscape. At the same time it is man-made technology that enables us to share the inspiring experience of our planetary home, as our technical media leaps across time and location with immediacy of access – in water, land, air or outer space. The human mind can be either a prison or a way to freedom – depending on who we think we are and where we think we are – where we are consciously “present”. The poet asks: “Why do you stay in prison when the door is so wide open?” [Jalal ad-Din Muhammad Rumi]

The apparent reality of our organised material environment can be imprisoning when it is so deeply embedded into our daily living that it becomes the paramount “reality” we experience. This is despite an acceptance, theoretically, of the revelations of science, and even of our own belief systems, about a subtle, dynamic livingness – call it subatomic life, God or the Holy Spirit – which pervades the material world and is both manifest and un-manifest, constantly affecting everything both materially and subtly. Yet we are realising increasingly that the organic, constantly growing and changing natural world continually demonstrates the fluidity, interrelatedness and interconnectedness in which we live, move and have our being. And we are beginning to discern the archetypal patterns and the pervasive forces which flow through and have effect according to the directing intention of their Creator.

Recognition is growing that these inherent patterns hold the key to solution for many of our apparent (and often man-made) problems as we come to the limits of past lines of thought. Biomimicry opens up a whole new vista of inspiration provided by the natural world in which we live and which we can so readily take for granted. On the website for Biomimicry we read: “If chaos theory transformed our view of the universe, biomimicry is transforming our life on Earth. Biomimicry is innovation inspired by nature – taking advantage of evolution’s 3.8 billion years of R&D since the first bacteria. Biomimics study nature’s best ideas: photosynthesis, brain power, and shells – and adapt them for human use. They are revolutionising how we invent, compute, heal ourselves, harness energy, repair the environment, and feed the world.” [See http://biomimicry.net/ and book, Biomimicry, Innovation Inspired by Nature]

New revelations in art are using the regenerative force of natural life forms to inspire healing thought and re-enliven devastated areas. Artist Jan Nguyen-Hatsishiba has created installations such as “Breathing is Free: Japan, Hopes & Recovery” where runners run through a devastated area in Yokohama along a course patterned on a Japanese Sakura or Cherry blossom tree. Using GPS carried by the runners the pattern is traced geographically and can be superimposed over the internet map of the area. A projection of the image of the Cherry Blossom tree on a screen is then an interface through which a viewer using binoculars can focus on any part of the tree and see different parts of the city. The beautiful synthesis of many technologies, natural images and man-made landscapes is brought to a single point of view and inspires deeper levels of understanding and healing. [See:http://pingmag.jp/2013/04/26/hatsushiba/]

New sciences, technologies and arts are reflecting the cyclic, seasonal pattern of Life’s breathing through the world and offering the first manifest glimpses of the great Life System in which we participate. Over seventy years ago the Tibetan wrote:

Everything—every form, every organism within all forms, all aspects of manifested life in every kingdom in nature—is intimately related each to each through the planetary etheric body (of which all etheric bodies are integral parts) which substands all that is. Little as it may mean, and useless as it may appear, the table at which you write, the flower you hold in your hand, the horse on which you ride, the man to whom you talk, are sharing with you the vast circulatory life of the planet as it streams into, through and out of every aspect of the form nature. The only differences which exist are those in consciousness… There is only the ONE LIFE, pouring through the mass of forms which, in their sum total, constitute our planet—as we know it … The concept of separateness, of individual isolation, is an illusion of the unillumined human mind.” [Telepathy and the Etheric Vehicle, page 148]

All the natural kingdoms live within, express and constantly affirm this Life System, its patterns, qualities and energetic direction – except perhaps for those in the human kingdom who, when caught up in old thinking (with its fear/desire driven thought-forms, world-view and rationalisations), attempt to modify the world according to what they think it “should” be in order to control its resources for their own sustenance, independent and irrespective of the greater whole in which they live – so at odds with the all-pervasive livingness of the natural world and the great co-ordinated Life System which is our shared home in the universe.

How do we escape such limitations? Much effort can be expended in reacting to history rather than envisioning and responding to an emerging future. How much devastation, heartache and misery have we witnessed as ancient feuds and limiting ideas about the human and the divine generate prejudice, fears, wars, upheavals and revolutions? This may have been how we have learned in the past – reactively and through much suffering. But the magnetic pull of the future is strengthening as old solution options run out and as our sense of who we are expands into human being and we take up our intended role within the greater System. Past discoveries then become the platform from which we soar into new realisations.

‘Local’ and ‘location’ are shifting from physical geography to focus points in consciousness – we can be virtually anywhere in the world or in consciousness at any time. There is a sense of something new emerging as we work it out live. At one level this may be seen in the rise of reality TV programs with their vicarious sharing of experience. Identifying with others extends our sense of self. Groups gathered around a shared point in consciousness share their knowledge and understanding (through investigative research and media broadcasting) and express through internet petition sites and social media – often extending into physical location gatherings and demonstrations to anchor and spread awareness. Modern revolutions are organised by internet and iPhone where “I” is a mass interconnection of consciousness. New models of governance and living are emerging spontaneously out of the experience – as with the Occupy movements.

Marianne Maeckelbergh writes in the latest Kosmos Journal: “Since the start of the Occupy movement, many commentators have offered their critique. The movement has no demands, they said, it has no structure, it doesn’t stand for anything, it’s just a conglomeration of random people with nothing in common, and so on. But if we take the time to look more closely, we quickly see that the Occupy movement embodies a crucial and important political message that is clear to those who participate. And far from having no structure at all, Occupy inherited a complex political structure that has been actively developed for nearly half a century. The fact that this structure is not perfect does not mean that it is not there. With the rise of the Occupy movement this political structure, referred to differently everywhere, began to get a common name: horizontality. Horizontality is a term that is used to refer to a fiercely egalitarian, decentralized, networked form of democratic decision-making and it is offered by this movement not as a demand, but as an alternative political system to replace representative democracy.

… Horizontal democracy attempts to ensure equality not by developing structures of authority and enforcement through which equality can be ‘declared’ and demanded, but rather by embracing diversity and conflict. Within these political structures, diversity is not a problem that needs to be resolved: there is no narrative of uniformity, no shared identity (national or otherwise) and no predetermined ideology. In the very way decision-making is structured, diversity is treated as a desirable characteristic for the polity, one that should be embraced and encouraged by the political structures developed.”

In the same Journal Patrick McNamara reviewing “Leading from the Emerging Future, from Ego-System to Eco-System Economies”, writes that the authors…

…take us on a journey from our current age of disruption to finding individual and collective ways to lead from the future as it emerges. … At the core is a shift of the interior condition of the leader. That is a shift of perspective – connected to source, sensing the emerging future and letting go of fighting the old system. It’s about shifting the place from where we operate so there is increased awareness, a stronger sense of purpose, and an intuitive notion of what is emerging. … A key to their success is a deep listening and an ability to help shift attention from downloading information toward presencing – or being truly present and sensing what is emerging, how to engage with it and how to create different results.” [See: http://www.kosmosjournal.org/ ]

What drives our living in this world is where we focus, what inspiration we perceive there, and how we think it into existence. We are learning that the material world is the effect of this process and that the subtle power of the Life in which we live enlivens everything in its system of manifestation. To change our world in accordance with its emerging future a fast expanding number of us are becoming…

…dedicated to rebuilding the shrine of man’s living, to reconstructing the form of humanity’s life, to reconstituting the new civilisation upon the foundations of the old, and to the reorganising of the structures of world thought, world politics, plus the redistribution of the world’s resources in conformity to divine purpose.” [The Rays and the Initiations, page 255]

Much has been achieved and there is an increasing sense of urgency to apprehend and express the subtle reality pressing for realisation. In that process lies the answer to apparent, current problems and schisms. When we enter into our subtle identity in the world of energies, we enter a clarity that opens up truer vision and understanding and move into a freedom that expands our sense of being and opens up greater knowing.

Purify your eyes, and see the pure world. Your life will fill with radiant forms. ~Rumi
Share

Hi, I'm one of a group of authors and editors for the Sydney Goodwill website.
Previous We Are Made Of Stardust
Next The Discipline of Joy and Achievement