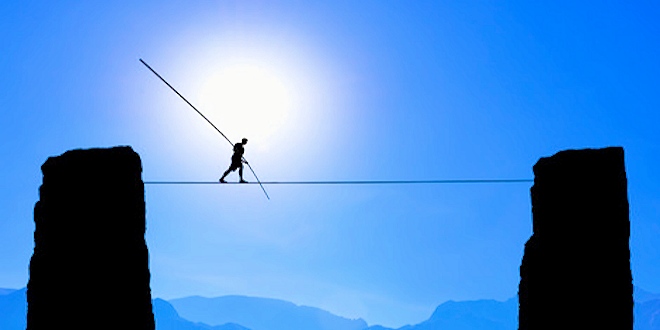 Restoring Balance Through the Human Heart

We may speak of “heart and soul” yet, in a sense, are they not one and the same? And surely we are seeing the heart of humanity moving to the fore with a new point of view – of balance – emerging, as ordinary human hearts open to the great diaspora of refugees fleeing the dire circumstances from which we are so safely insulated, even as governments vacillate over how to control the human flood and its impact on their hold of material resources. That balance point now includes human compassion for human need. Heart to heart. No longer is the crisis distant or vicariously separated by a television screen. It is now immediately flowing past the front doors of ordinary people, human beings who are demonstrating through their compassion and kindness that they are in fact extraordinary, operating within a soul-sized understanding of life values. A new realisation is emerging that each and every one of us is our “brother’s keeper” – thus answering Cain’s question of God at the beginning of time. [Genesis 4:9]

This realisation is finding expression through the generosity of many individuals and is radiating through the media with articles such as one in the Guardian in which Anders Lustgarten asks:

The refugee crisis has brought a compassion explosion – where will this energy go?” he goes on to address the question: “It’s far too early to call this a turning point, but the compassion explosion is compelling because it goes against all the dominant themes of modern politics. … And the key to it has been shaming our leaders through our own actions, not waiting for them to do the right thing but showing them how to.… Most of all, action connects us to other human beings, an ever more critical need as we live more and more of our lives virtually and online. When we drive a van full of supplies to Calais, or volunteer in a refugee centre, or open our homes to exhausted families for a few days, we meet these strange and alien creatures we’ve been repeatedly taught to fear – and we find that they’re funny, or interesting, or annoying, or all those things at once. In other words, that they’re just like us. We expand our sense of who we are, and of who other people are, and that is brilliant for both sides… Because overcoming the fear of others that’s been drummed into us is probably the most radical thing we can do right now. …Where will it go, the compassion explosion? Will it melt away as the photo of Aylan Kurdi fades in our memories? It’s completely possible, of course. But my bet is that the genie is out of the bottle. … And my bet is that as we realise that this refugee “crisis” is no crisis but the new normal, we’ll start to think about what is causing people to move across the Earth in such huge numbers… That’s the next phase: to look at the causes of migration. Climate change. Western military intervention. The depredations of development banks and corporations. Propping up dodgy dictators in the name of stability. These are harder to fix than delivering bedrolls…” Guardian article by Anders Lustgarten Click here for the full article

…restoring the point of balance into the One Heart from which all flows as truly needed.

And so we are pointed to the causal forces making people flee their homelands, and it clarifies the responsibility we all share in restoring true balance to our world – not only balance in the distribution of the world’s resources but restoring the point of balance into the One Heart from which all flows as truly needed.
There are now 60 million refugees and displaced people in the world. For them, national boundaries and demarcations no longer exist. They are cast, stateless, into a world still trying to maintain geographically separate territories. These numbers are constantly increasing and, through no fault of their own, are forcing the tipping point in human realisation from a point at the centre of national identity to a point at the centre of an emerging new human identity.

…our point of balance, of identity, is shifting from the mind to the wise heart.

The vision of our world as a beautiful whole, shared with us by the astronauts, is becoming manifest through the human heart and mind. From space there are no divisions to be seen; there is just the movement of light, atmosphere and clouds, flowing around and through the whole – unimpeded by borders. They move naturally according to the forces of the greater whole. The global movements of peoples, global climate change, global humanitarian agencies, global economic crises, pandemics, even multinationals, are also moving to the rhythm of planetary conditions. Our physical experience of the world may appear to be local but our minds and hearts are increasingly global in their embrace. At the same time our point of balance, of identity, is shifting from the mind to the wise heart. It seems that a major point is being reached wherein, as the esoteric texts describe, “Christ is born in the cave of the heart”. The child, the Son, of the union of Soul and personality, is being born through the human kingdom as more and more open their hearts and allow wise compassion to radiate.

Something finer, more subtle yet powerful, is entering our world through the human heart. The human mind has developed into a marvellous instrument for ordering the material world – through ideologies, theories and hypotheses; with administrations, organisations and institutions; and supported by the material sciences. We are now beginning to understand the mind’s raison d’être as an instrument for the wisdom of the heart – that true heart which sees no distinctions based on physical difference of form, place or age.

…a need for clarity and sincerity in government which existing structures cannot provide while based on the conflict of polar opposites.

This expanding heart, swelling from within, is causing cracks to appear in the limited and limiting structures formed out of past incomplete thinking before we began to “think in the heart”. And so we now see the global financial troubles as the inequitable distribution of wealth based on desire over need, at the same time old structures of government are producing parliaments with no clear leadership party and there are more frequent leadership “spills” and changes. The constant opinion polls while targeted at specific groups and individuals are indicating general dissatisfaction and a need for clarity and sincerity in government which existing structures cannot provide while based on the conflict of polar opposites.

…the human kingdom whose heart is opening as the portal for the saving force to enter the world.

We are overcoming our fear of difference and finding courage – heart – to speak up for truth and to act on behalf of those less fortunate, realising that essentially there is no difference where life and need are concerned. Our world view is being transformed and we are transcending an old sense of who we are. There is no single leader embodying this, though a few inspire. It is a mass, human movement in consciousness. It is a growing universal realisation as we become immersed in the era of universality gradually replacing the old energy dynamics of the passing era of authority. God immanent is beginning to express and to more clearly reflect God transcendent as the two aspects unite in the human kingdom whose heart is opening as the portal for the saving force to enter the world.

How critical now is the balancing of energies, of points of view, of all differences, rather than the destructive force of separation, opposition and conflict. How much more powerful is humanity in its wholeness, than are a few individuals or groups appearing to be “in power”. How powerful is the growing demand for clarity, truth and openness as old secrets, counter to human progress, become revealed and addressed. Could we be transitioning from the politics of material power over form to the politics of the soul of humanity? The Agni Yoga writings give direction:

…every good deed transforms some particle of chaos. Each kind action is a burning away of chaos. This description has a basis in reality, for every impulse toward kindness and Light kindles the best fires, which transmute chaos into a new, purified form…” Supermundane I, sloca 168

We have many reasons for speaking about unification…Now We shall add the words of the Thinker… One day, the disciples asked Him the meaning of unification. At that moment they were passing a gigantic wall, and He pointed to the powerful stonework saying, ‘Observe how these stones support each other. We cannot say which of them is the most important. They are not joined by anything, yet they have withstood many earthquakes. They are held together only by unification and the natural affinity of their surfaces. People try to join stone artificially, with clay or different mixtures, but such structures are frequently destroyed by earthquakes….‘If people attempt to strengthen their relationships by artificial measures, they will not be protected against dissolution. It is better and stronger when human hearts unite spontaneously. Such unions need no artificial aids, least of all the bond of gold. Beware especially the bonds of gold….‘I affirm that even the most ardent people may not be able to judge and correlate values; only human hearts build an adamantine wall.’
…The Thinker also said, ‘Man will not be able to fly until he finds suitable wings. The symbol of Daedalus will be an eternal warning, but We shall often discuss the far-off worlds. By thinking about them we shall find the wings….‘Let everyone tell us how he imagines the far-off worlds. Each one will be right, no matter how vivid his imagination, for, in truth, there is nothing that does not exist, and our imagination can invent only a small part of the reality….‘Do not feel disappointed that your imagination is limited, for compared with Infinity all is limited. Let us acquire true striving in the midst of Infinity.’”Supermundane I, sloca 201

…hypocrisy is based on heartlessness. Indeed, the bond with the higher spheres is formed through the heart, a heart generous in all its expressions.’”Supermundane I, sloca 244

To Mercy, Pity, Peace, and Love
All pray in their distress;
And to these virtues of delight
Return their thankfulness.

For Mercy has a human heart,
Pity a human face,
And Love, the human form divine,
And Peace, the human dress.

Then every man, of every clime,
That prays in his distress,
Prays to the human form divine,
Love, Mercy, Pity, Peace.

And all must love the human form,
In heathen, Turk, or Jew;
Where Mercy, Love, and Pity dwell
There God is dwelling too.

Hi, I'm one of a group of authors and editors for the Sydney Goodwill website.
Previous UN Peace Day, 21 September 2015
Next Libra Sun Aries Full Moon 2015