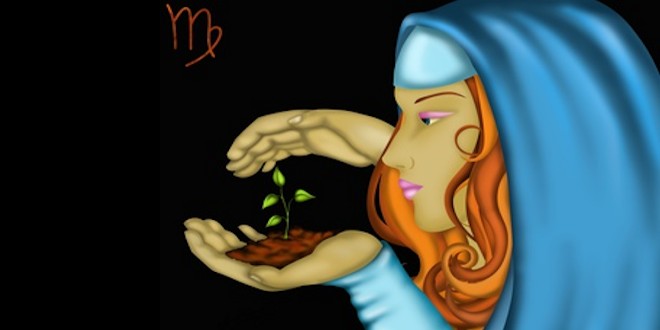 I am the Mother and the Child. This is firstly indicating that this sign is both the Mother aspect and the Child, both being components of God. This signifies to me the birth of the new, but also the process of gestation leading to birth and beyond. Virgo is the 8th sign of the zodiac, the 8th month of pregnancy being the one before actual birth, the culmination of 8 months growing in the mother’s womb. It is the lead up to gestation and the actual birth itself, where the child is almost at full term, ready to be born and to be thrust out of the womb, as a now separate life and entity, yet still part of the Mother.

We could ask, what plans do you have that are about to be thrust out into the world, which you have nurtured and loved and are ready to be born? What plans does Humanity have, collectively? If we put all of our thoughts together into one big collective union, what would be the result? Do we not need to just look out at the world and see this?!

The second part of the Mantram is – ‘I, God, I, matter am’. It is an affirmation, one that perhaps we have never really understood. God is everywhere, not separate. The life aspect of the universe, whether you may wish to call it God, Universal Energy, the Great Architect, or anything else, is of course part of matter or physical life as well. The Tibetan Master has said that matter is the densest form of God, one that is tangible. It seems removed, yet it is not. It certainly is not separate, as we have thought in the past. God is here and there, part of the same thread, the same fabric…This is why God is part of the one giving life, the Mother, and also the one being born, the Child.

Virgo itself is entrenched in our consciousness. As I mentioned before, this sign, more than any other, has perhaps been the most influential in our past. It is an earth sign, connected to the earth and cycles. It rules birth, which is part of the great cycle of birth and death of this planet Earth. If we look at nature, when left alone it is an evolved organism, one that has already perfected itself to provide balance and life on this planet.

Matter has been evolved to this point to provide us with a vehicle for Humans to evolve. The one thing that Humans have through this physical vehicle that no other kingdoms have is the mind aspect, the chance for free will. The other kingdoms are either ruled by planned patterns of behaviour or by instinctive behaviour. Humans have evolved past this, as we have free choice to decide.

Within the DNA of the Earth lies the blueprint of Virgo, to supply us with life, through being born into a physical body. Yet there is more. We must choose wisely how to respond to this, to use the God aspect in the physical body. We do this through the mind aspect. Our goal for now, is to develop the higher mind, the one that connects us to our higher self, our Soul, then beyond that, to God itself, using the physical vehicle to do what it has been evolved to do, be an extension of God or the life aspect.

Lower Virgo has done its part. The lower mantram for Virgo is ‘Let matter reign’. Matter has reigned as it was planned to do. Yet we sense that it is no longer the case in that something new is being born out into the world, one where the God or Life aspect lives through. Materialism is having one last hurrah, one last push of reaction as we sense the inner life and connect subtly with something else.

Now we need the higher aspect of Virgo to progress, to show us that God is true in physical life and form, in everyday life which Virgo has ruled us for many years. Imagine living with God in your consciousness from the time you were in the womb as a child, passed on by your mother who knew the life aspect within herself and you and birthed you out into the physical world of Earth and matter. An extension of consciousness. Has this been done, are we awakening to it, as we awaken to the God within? ……

There are so many planets in retrograde at the moment, as has been reported by astrologers. Thankfully the exoteric ruler of Virgo, Mercury, has again moved out of retrograde. Still, all the outer planets up to Mars, except Jupiter, are still retrograde. Retrograde means that the planets ‘appear’ to go backwards, here from Earth. Nothing could actually stop these massive planets from moving in space, except perhaps the power and gravity of a Star or Sun, or of course, a black hole.

To me, the effect of retrograde can been seen as an energetic holding back, as the energetic flow between the planet to earth is changed slightly, as is normal with any movement of a physical object. An example would be what I recently I experienced Saturn’s retrograde in my chart over some important planets in key locations, notably my Sun. This was experienced as an intense restriction on parts of personality expression, as Saturn does ask for its due. Though it has been difficult, the releasing of this is quite something to experience, as Saturn gives as much as it asks for, and in the end, we always stand more liberated.

As for the Earth, these planets retrograding affect us both collectively and personally. The collective is felt by us all, as we share in what transpires. This is, of course, revealing our oneness and unity and the more we learn about this the closer we become to the understanding of God in matter, as we are all living in matter in this world. We are living as humans in a human body. We all experience the same, yet in our own unique way. Whilst I felt Saturn’s retrograding effect on my personality, others might have felt it towards their minds (Mercury) or their freedom (Uranus).

The opposite of Virgo is, of course, Pisces, so this must be where the Moon is during the Full Moon. A Pisces moon is a sensitive one, where the bounds of emotional expression and impact are opened up to the greater universal. The Full Moon on the ocean at night is a perfect landscape for this vision, as the Moon silhouettes across the ocean, lighting up that great body of water in a rippling magnetism, drawing us in as we gaze out at the ocean and then up to the eternal night sky, being lost in its beauty and sheer size, lost in the universal life of the heavens.

The contrast between the Earthy Virgo Sun and the watery Pisces Moon is what we need to balance with this particular axis. Wanting to get lost in Neptunian emotions whilst having the feet planted firmly on the ground, is difficult for many, yet accessible to all. Both these signs are mutable, so changing and adapting are the modes of operation. I suggest we enjoy bringing the spiritual emotions into everyday life, just use the higher mind for inspiration and infuse it with Pisces spirituality.

The ascendant for this chart and therefore its ruler during the Full Moon is Aries, the God of War. Expect the warrior energy to be present throughout the world, in all the forms it takes, good and bad. Use it to fight for what you believe in to be true and right, for yourself and others. Both Virgo and Aries have strong links to Mercury, so expect messages to come through from the inner and subtle realms, as strong though subtle messages. And remember always – ‘I, God, I, matter am’…..

Stephen is an Esotoric Astrologer and has a keen interest in the Esoteric line through the Alice Bailey books. Stephen offers astrological readings - - contact him via his Facebook page.
Previous Leo Solar Festival 2018
Next Kahlil Gibran’s The Prophet Official Trailer