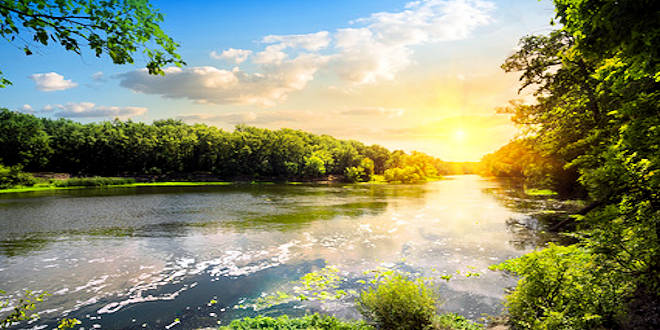 Feel a River Moving in You

The pains of the world are also the birth pains of the human heart as it comes into its own – freely giving of itself according to need.

Looking through the current turmoil in our world, one can discern the rising response of the human heart to the need of the hour. As that need becomes more urgently clear, so does the heart response intensify. Wherever we look, either immediately around us or through the global media network, points of need within all the natural kingdoms are being brought to the notice of the whole world. Response then flows back through our global network of interconnection – according to the resonance of the hearts that are inspired to send aid and support – whether for human beings, for creatures great or small, or for areas within the environment of our beautiful blue planet. This response is the free gift of the heart. The pains of the world are also the birth pains of the human heart as it comes into its own – freely giving of itself according to need.

Through such hearts our divine essence expresses.

Aid agencies rely on donations, freely given, rather than on resources taxed by governing powers. The many millions of foundations and service groups all rely on these gifts of the heart. And forming these groups and agencies are the countless individuals who respond to the call of their hearts to serve those in need. Through such hearts our divine essence expresses. It is the spark within us which knows and gives because of its inherent nature radiating freely and unconditionally from its eternal source, the Soul. It is the solar centre of each little system just as the Mighty Sun radiates life-sustaining light on the world from its centre at the heart of our solar system. This Soul is the true, enduring Self, the spark of the greater system reflected in the little self. The Agni Yoga teachings remind us that:

Just as the sun is the heart of the system, the human heart is the sun of the organism. There are many sun-hearts, and the Universe represents a system of hearts; that is why the cult of Light is the cult of the heart. To understand this abstractly means to leave the heart out in the cold; but as soon as the Light of the sun-heart comes alive, the need for the magnet’s warmth will make it shine forth like a true sun. It has been said: “Let your heart lead you in crossing Santana.” That is how you can make the concept of the heart resistant to the cold. You can look upon the rhythm of the heart as the rhythm of life. The Teaching about the Heart is as bright as the sun, and the warmth of the heart speeds as swiftly as a sunbeam. Everyone has felt astonishment at how a ray of the rising sun can instantly insulate everything from the cold. The heart can do the very same thing!

We are beginning to reflect into the world that aspect of our being which is universal and immortal: the human Soul.

Something larger is expressing through so many heart responses. A great heart is radiating throughout the millions, perhaps billions, of conscious, human heart-offerings that are constantly circulating throughout the world. We may think the global financial system is for business exchange but it is equally at the disposal of the human heart that gives. Global communication networks alert us to the need, and the global financial and distribution networks deliver the heart offerings to where need arises. It may be far from perfect as yet, but we can already see the underlying direction. We are beginning to reflect into the world that aspect of our being which is universal and immortal: the human Soul.

The soul alone perceives correctly; the soul alone has the power to contact the germ or the principle of Buddhi (in the Christian phraseology, the Christ principle) to be found at the heart of every atom, whether it is the atom of matter as studied in the laboratory of the scientist, whether it is the human atom in the crucible of daily experience, whether it is the planetary atom, within whose ring-pass-not all our kingdoms of nature are found, or the solar atom, God in manifestation through the medium of a solar system.  Christ ‘knew what was in man’ and therefore could be a Saviour.” The Light of the Soul, page 19

Although written seventy years ago, these words are just as immediate in their import:

It is our immediate duty therefore, in the interests of the kingdom whose citizens are immortal, to unfold that which in ourselves is divine, and whose characteristics can be known by the sense of value, by the attribute of light, and by the nature of its love and loves. Full expression of the ‘Hidden Man of the Heart’ is the need today. The revelation of the Self within the self is the demand. It is this self, nurtured, fostered, then trained and developed, which is the immortal aspect in man, and for this self are we responsible. There is no evading this, nor is there evading of the fact that we are part of a whole, and that only as Christ enters into recognition by the entire race and is expressed by humanity as a whole, shall we achieve that for which we have been created—the fulfilling of the will of God, as Christ fulfilled it. We need to transcend the inferiority complex which rises up in questioning when such words occur as the above phrase: ‘As Christ fulfilled it.’…this idea of a personal Christ must be eclipsed and superseded by Christ as the life and hope in all of us. It is only the uniquely significant who understand the true inner meaning of immortality. Those in whom the sense of values is subordinated to the values of the soul, whose consciousness is that of eternity, are eternal in their living processes…”From Bethlehem to Calvary, page 277-8

The human heart (“the Christ within” in Christian terminology) is expanding and refining into its immortal state. Through its free response to greater need it transcends its temporary, personal reflections in the world of forms. It begins to reflect the One in Whom we live and move and have our being and the Greater Life at the centre of our solar system. Nurtured within the Mother of the World Who provides the substance through which to grow and express, it learns its true being and realises its freedom from the hold of substance as it begins to radiate through its many forms. And so the Light of the World shines through the outer seeming as the human heart expresses the freedom of its true being and manifests through free will. Freedom and free will are qualities whose true meaning and significance we may be only just beginning to sense.  The Tibetan Master explained:

Free will involves a basic understanding of the lines of world cleavage; it concerns right choice and consequent correct action for the group and is determined every time by that which is right for the whole and not so much by that which is right for the part. Humanity is only now reaching the point where free will can be of significant importance. …Release for humanity will come when the so-called good people of the world give up their pet theories and their beloved ideals and grasp the essential fact that entry into the Kingdom of Heaven and into the new age will take place when mankind is truly loved and selflessly served, and when the true, divine purpose is seen and humanity is found to be one indivisible whole.” The Externalisation of the Hierarchy, page 254-5

During his near death experience, Dr Eben Alexander discovered how free will is an inherent aspect of human nature:

I saw the earth as a pale blue dot in the immense blackness of physical space. I could see that earth was a place where good and evil mixed, and that this constituted one of its unique features. Even on earth there is much more good than evil, but earth is a place where evil is allowed to gain influence in a way that would be entirely impossible at higher levels of existence. That evil could occasionally have the upper hand was known and allowed by the Creator as a necessary consequence of giving the gift of free will to beings like us. … The very fabric of the alternate dimension is love and acceptance, and anything that does not have these qualities appears immediately and obviously out of place there. …But free will comes at the cost of a loss or falling-away from this love and acceptance. We are free; but we are free beings hemmed all around by an environment conspiring to make us feel that we are not free. Free will is of central importance for our function in the earthly realm: a function that, we will all one day discover, serves the much higher role of allowing our ascendance in the timeless alternate dimension. …We—the spiritual beings currently inhabiting our evolutionarily developed mortal brains and bodies, the product of the earth and the exigencies of the earth—make the real choices. … How do we get closer to this genuine spiritual self? By manifesting love and compassion. Why? Because love and compassion are far more than the abstractions many of us believe them to be. They are real. They are concrete. And they make up the very fabric of the spiritual realm. In order to return to that realm, we must once again become like that realm, even while we are stuck in, and plodding through, this one.” From Proof of Heaven

Freedom can often be thought of as release from undesired constraints on personal liberty, but it is in reality a quality of the true spiritual being, the “Hidden Man of the Heart”. To be free is to consciously remember who we really are and live the freedom of the Soul radiating through outer material presence:

the freedom which the sannyasin knows as he roams free in the three worlds—unsupervised or unintruded upon by aught but his own soul. It is the freedom which gives mental help, emotional response and physical time as and when the disciple chooses. These are not evoked by habit or by the demand of others, but are the free contribution of the soul to a current need.” Discipleship in the New Age II, page 758

True service is the spontaneous outflow of a loving heart and an intelligent mind; it is the result of being in the right place and staying there; it is produced by the inevitable inflow of spiritual force and not by strenuous physical plane activity; it is the effect of a man’s being what he truly is, a divine Son of God, and not by the studied effect of his words or deeds.”  A Treatise on White Magic, Page 188

“When you do things from your soul, you feel a river moving in you, a joy.”  ~ Rumi
Share

Hi, I'm one of a group of authors and editors for the Sydney Goodwill website.
Previous Leo Sun Aquarius Moon – 2017
Next Virgo Sun Pisces Moon 2017