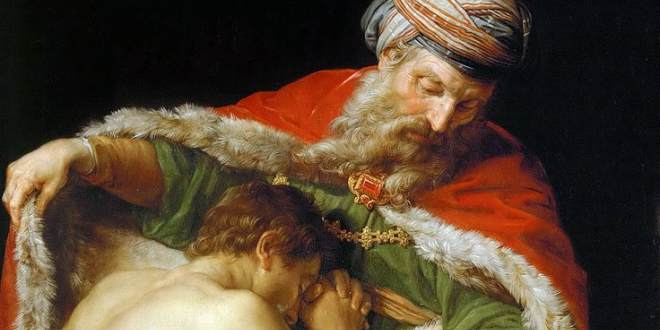 The Return of the Prodigal Son
by Pompeo Batoni 1773

Time can seem such an ephemeral concept that it is almost unreal and yet it drives our ordinary lives with a powerful authority and we can be swept along in its great tide. Timetables and schedules organise our day. Habitual patterns of activity keep pace with the unfolding of the day’s hours, minutes and even seconds. Speed is urged to “keep up” and “be on time” or, better yet, “ahead of time” and records are made and broken as we try to “beat the clock”. Caught in the currents and vortices of the speeding up of life, we cram more and more activity into our increasingly “time poor” lives – so there never seems to be “enough time” or we don’t’ “take the time” we feel is required. The pressure of never quite getting ahead and always somehow catching up – with work, commitments, responsibilities, family, friends, sleep, etc – produces many of the stress-related illnesses of our “times”.

It seems that the more narrowly we focus, the faster time moves and the more intense (and tense) we become. The interludes between the breaths and inflow of energy are reduced to almost non-existent and we become energy-deprived, life deprived. Our sense of proportion can shrink and distort as we tumble down the dark hole of “tunnel vision” and become so immersed in it that we lose sight of who we potentially are in reality. That is until something shakes us out of it. In the book, Tracks, Robyn Davidson discovers how flexible the concept of time is, as she gradually shakes off its addiction and becomes “deprogrammed” in her desert trek:

I was torn between two different time concepts. I knew which one made sense, but the other one was fighting for survival. Structure, regimentation, orderliness. Which had nothing to do with anything. I kept thinking wryly to myself, ‘…if this keeps up it will take us months to get there. So what? Is this a marathon or what? This is going to be the best part of the trip, having Eddie with you, so stretch it out, idiot, stretch it out. But but…what about routine…?’ and so on.  ..The turmoil lasted all that day, but gradually faded as I relaxed into Eddie’s time. He was teaching me something about flow, about choosing the right moment for everything, about enjoying the present. I let him take over.

While we may feel ruled by time, it is in reality the reverse.

While we may feel ruled by time, it is in reality the reverse. We have created an attachment to time, an addiction, or at least to our particular concept of it. We also have the capacity to hold in mind more than the current moment. Our innate creativity can use our imaginative faculty to remember (and even re-make) the past and to anticipate and envision possible futures. We may then respond or react to these imagined realities and a turbulence of reactive tides can weave around and cocoon us away from the actuality of the moment. For the animal kingdom, it seems that a more purely immediate consciousness operates, less trammelled by past and future possibilities. They may have a clearer view of what is happening in the moment, the energies at play, than humans who can become immersed in a self-referencing chain reaction. Louise Booth writes of the healing ability of one particular animal in her book When Fraser met Billy. The cat, Billy, seems to know better than she or her husband just how to comfort and calm their son, Fraser, who had been diagnosed with autism and could react violently to apparently ordinary events. The article is at: http://www.smh.com.au/lifestyle/when-fraser-met-billy-20140225-33fhs.html

We are returning as the Prodigal son with all the wisdom that experience has taught and are seeing, as if for the first time and in a truer light, what we thought was familiar.

Humanity has left behind the simpler, clearer view of its animal nature and has travelled into the far realms of the mind, expanding horizons as it went, travelling through a country with no geography, and moved by increasingly subtle lines of force. Now these forces and our innate Self are drawing us home. We are returning as the Prodigal son with all the wisdom that experience has taught and are seeing, as if for the first time and in a truer light, what we thought was familiar. We bring new eyes, a new vision and a new future in which all the kingdoms in nature are revered as co-creators of the world we share. Human, animal, plant, and rock in all their myriad forms, both great and small, hold their essential place in the web of Life that sustains us all.

Deeper insights into time and consciousness, are offered in this commentary on the Yoga Sutras of Patanjali:

Intuitive knowledge is developed through the use of the discriminative faculty when there is one-pointed concentration upon moments and their continuous succession.
It has been said that a complete understanding of the Law of Cycles would bring man to a high degree of initiation.  This Law of Periodicity underlies all the processes of nature and its study would lead a man out of the world of objective effects into that of subjective causes.  It has also been said that time itself is simply a succession of states of consciousness and this is true of an atom, a man or a God.  It is this truth which underlies the great systems of mental science and Christian Science in the occident, and many of the oriental philosophies.  This sutra gives the key to the relation between matter and mind, or between substance and its informing soul, and this can be realized when the words of a Hindu commentator are considered.  He says:
‘As an atom is a substance in which minuteness reaches its limit, so a moment is a division of time in which minuteness reaches its limit.  Or a moment is that much of time which an atom takes in leaving the position in space it occupies and reaching the next point.  The succession of moments is the non-cessation of the glow thereof.’
When we can realize that an atom and a moment are one and the same, and that back of these lies the Realizer or Cognizer of both, we have got the clue to all states of consciousness itself, and to the nature of energy.  We shall also have reached a true understanding of the Eternal Now, and a just appreciation of the significance of the past, the present, and the future.  This, we are told here, can be gained by concentrated meditation upon time and its units.” The Light of the Soul, Book III, Sutra 52, page 362-3

Wherever there is something at issue in the world – and we see much turmoil as humanity refuses to ignore what its growing enlightenment reveals – the problem can usually be traced to individual self-interest. Yet human minds are opening to embrace a greater, more interdependent world and their sense of self is expanding with it, carried along on a roiling, expanding wave through human consciousness. Leaders, governments, groups and individuals in positions of power achieved through the old methods of fear and oppression, divide and conquer (however subtly applied), are being seen through. Humanity no longer tolerates rule by unenlightened, self-serving interests that lack wisdom, compassion and a vision for the future of our planetary home as a whole.

What we can now recognise as wrong or evil may in the past have been the best we could strive for, but Life is ever unfolding into expression and yesterday’s good becomes today’s limitation. Attachment to a superseded scope of understanding, that has become too small for our potential to express, can hinder the revelation that is unfolding through our consciousness as part of the expression of the “One in Whom we live and move and have our being”. Every progressing point of light must press on and relinquish the distraction of pride in past achievement. We are told:

Even the realm of the soul itself, and the ‘Voice of the Gods,’ as it is called, are seen to have latent in them the seeds of attachment; therefore, turning his back upon all that he has gained, and putting behind him all thought of the perfections achieved and the powers developed, the Son of God, the Christ in manifestation, again presses forward towards a higher goal.  At every stage of the path, the injunction sounds forth:  ‘Forgetting the things which are behind, press forward’ (Phil: IV.), and every new initiation but marks the commencement of a new cycle of endeavour.” The Light of the Soul, Book III, Sutra 51, page 360

At the core of all cycles is the Eternal Now – where time and space meet and where the point of being resides and yet is everywhere present. We are foretold of this moment of revelation:

The disciple knows or is learning to know that he is not this or that, but Life Itself.  He is not the physical body or its emotional nature; he is not, in the last analysis … the mind or that by which he knows.  He is learning that that too must be transcended and superseded by intelligent love (only truly possible after the mind has been developed), and he begins to realise himself as the soul.  Then, later, comes the awful ‘moment in time’ when, pendant in space, he discovers that he is not the soul.  What then is he?  A point of divine dynamic will, focussed in the soul and arriving at awareness of Being through the use of form.  He is Will, the ruler of time and the organiser, in time, of space.  This he does, but ever with the reservation that time and space are the ‘divine playthings’ and can be used or not at will.” The Rays and the Initiations, page 107

Hi, I'm one of a group of authors and editors for the Sydney Goodwill website.
Previous What is the soul?
Next Fly Above All Barriers