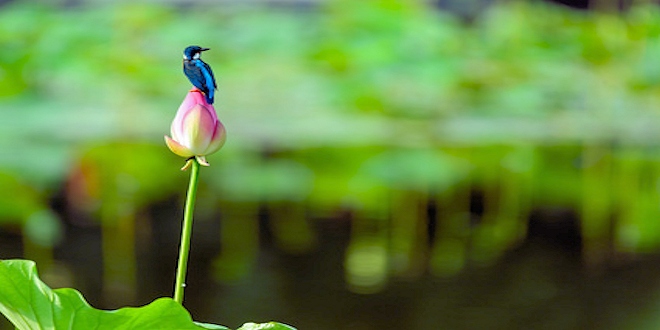 Joy is a Special Wisdom

Joy carries hope on its wings and sings to us of a future beyond pain and death.

We are told that “joy is a special wisdom” but how can we speak of joy when there is so much sorrow and suffering in the world? And yet how can one persevere and endure the pain of living in the world without access to the wellspring of the heart that knows the vivifying and uplifting power of joy? Joy carries hope on its wings and sings to us of a future beyond pain and death. It is the essential promise of Life and the power that can bear us through the traumatic effect of illusions and into the true Heart – as explained in the Agni Yoga writings:

Some wonder how it is possible to speak of joy during times of hardship. But it is on the wings of joy that one flies over the abyss. When man has reached impassable rapids he cannot turn back and must fly over them in order to circumvent the danger. It is happiness that the wings of joy are always with him. The beauty of the universe helps to call forth from the depths of the consciousness sparks of joy…The Thinker referred to the stars as the sparks of joy.” Supermundane III, 578

Joy comes to us in glimpses, sparks from the inner realms.

Joy comes to us in glimpses, sparks from the inner realms. Too exquisite for eyes conditioned to the darker tones of the world, it comes in brief moments as balm to the weary pilgrim trudging through the valley of the shadow of death, and builds, step by step, the sure certainty of our eventual entry into the Heart of Love.

One could write a book about joy, but We prefer to give glimpses of joy, linking them with thoughts about grave dangers…You know that wearing many layers of the finest silk can keep one warmer than would a fur coat. Reiteration generates an accumulation of precipitations, providing an increased power of psychic energy, but these precipitations should be subject to a certain rhythm…Joy cannot be just one joy. There are innumerable joys, and each of them touches upon a particular combination of nerve centers.”Supermundane II. 333

The power of love to bring joy even in the most dire of circumstances has been beautifully illustrated in film. One outstanding example is Life is Beautiful which centres around a Jewish Italian book shop owner, who must employ his fertile imagination to shield his son from the horrors of internment in a Nazi concentration camp. [See the trailer at: https://www.youtube.com/watch?v=zqAVwCK4r2Q ] A more recent movie is Room which begins where 24-year-old Joy and her five-year-old son Jack live in a squalid shed they call Room. They share a bed, toilet, bathtub, television, and rudimentary kitchen; the only window is a skylight. They are captives of a man they call Old Nick, Jack’s father, who abducted Joy seven years ago… She tries to stay optimistic for her son, despite being sometimes overcome with depression and is suffering from malnutrition. She allows Jack to believe that only Room and its contents are “real,” and that the rest of the world exists only on television. They eventually escape to then face the challenge of adjusting to a larger, wider world. [See the trailer at: https://www.youtube.com/watch?v=E_Ci-pAL4eE ]

The imagination is a thought-field on which the divine can reflect if we are tuned towards it.

In both these films a parent uses the power of their imagination to re-interpret dire circumstances in terms of joy in order to protect a child’s heart from the brutal effects of worldly illusion and so keep their souls alive in the world. The imagination is a thought-field on which the divine can reflect if we are tuned towards it. We’re told:

…Man should realize that he is called to saturate Infinite Space with thought. The realization of the infinite power of thought is in itself the highest joy. Imagine what a beautiful garden of thought has been given to you, and rejoice at this knowledge…”Supermundane II, 371

In a recent tribute to the astronaut, Edgar Mitchell, Dr Eben Alexander quoted Edgar’s description of seeing Earth in the starry heavens in a rhythmic display from the revolving spacecraft. His description expands the imagination into new realms of thought and the ideas arising within it:

We were in barbecue mode, with the spacecraft rotating every couple of minutes to avoid any area overheating in the intense sunlight. I could see ten times as many stars as you can ever see from earth, so the view was spectacular. With the rotation, I would see the earth, moon, and sun pass by the window every few minutes. The immensity and serenity of the universe struck me in an entirely new way, out there suspended between the great blue jewel of earth and the dusky moon we were leaving behind. The setting was perfect – I suddenly sensed the profound consciousness of the universe – how it is completely interconnected and aware – an absolutely indescribable awareness. My life was changed forever.”Edgar Mitchell – NASA Astronaut & 6th person to walk on the moon

The Agni Yoga remind us that:

…‘Ideas are borne on fleet wings.’ It is joyous to liberate a bird from its cage, and it should be equally joyous to set free a salutary idea. Thought must nourish space, otherwise people will be deprived of the opportunity for progress. Let us free ideas from all bondage and chains. Let us not rely on wardens, but speed our own liberation.”Supermundane I, 214

What is it that can bring a sudden smile to a refugee child’s face and in a flash transcend the unimaginable horrors they have seen and been subjected to? What mighty power brings the human spirit through the valley of time where the disconnected minutes yield only partial glimpses of what is too big and too fathomless for the little mind to grasp? Herman Hesse stretches our thought so we might apprehend it:

Have you also learned that secret from the river; that there is no such thing as time? That the river is everywhere at the same time, at the source and at the mouth, at the waterfall, at the ferry, at the current, in the ocean and in the mountains, everywhere and that the present only exists for it, not the shadow of the past nor the shadow of the future.”Hermann Hesse

…having exhausted all defences we arrive at the peak of vulnerability and find a new innocence where only our spirit can survive the rarefied air.

Deep currents of being carry us on our inexorable journey until, having exhausted all defences we arrive at the peak of vulnerability and find a new innocence where only our spirit can survive the rarefied air. Then we may know that the same Life is at the heart of all things, that “Spirit is a quality of matter.” [Supermundane IV, 706] In a more recent transmission we learn that:

…Joy is a synthesis of light and love. It arises from the wisdom of the heart that has known the pain of human living. It is the reward of the soul that has extricated itself from the world of division and conquest and, by passing through the searing, purifying fires of transformation, has entered the union that is called the Kingdom of Souls. The exultation of divine union appears in the joy radiating from the purified soul. That joy, based in spiritual love and the light of wisdom, holds a key to the future revelation of heaven on earth.”K Message 30 See: http://www.callfromthemountain.net/

We are coming to realise the power of our imagination, the kind of thought which puts us in touch with the very source of thought and the worlds which flow forth from it.

…recognize the various strata of thinking. It is usually believed that the exterior layer of thought is the most perfect one, for it is more easily expressed in words, but that idea is incorrect. Far more significant is the inner layer, which is expressed through feeling. This layer has a much stronger hold on man; from it rise the actions that affect one’s karma. The sensitive, elevated consciousness knows how to heed the inner thinking. It needs no words and knows that ascent is forged in the hearth of silence…”Supermundane IV, 710

The power of joy inspires thought which uplifts us into a more beautiful future – so longed for.

…illumination that comes through joy and love is stronger than any insight that comes through suffering. Yet, people insist that it is suffering that purifies humanity. Why is it that man is not capable of utilizing the higher path to illumination? The answer is simple—suffering is sown by man himself in the earthly world, and it partially penetrates into the Subtle World. But pure joy and love live in the Fiery World, and are seldom experienced by man. During the coming evolution people will realize where their treasure lies, and will turn to this panacea of light…”Supermundane IV, 732

The Tibetan Master also reminded us of the new path of Joy:

Have you ever thought…that just as there is a discipline of pain and of sorrow, there may also be a discipline of joy and of achievement? This is a thought worthy of attention. Men need these days to learn this new truth, and its perception will greatly change human consciousness. That which is bliss is today here or on its way, and the disciples and aspirants of this present time must be taught how to recognise and implement it.” Discipleship in the New Age II, page 671

And so, let us call on joy and open the gates to all that is good, true and beautiful.

…joy is a rare bird. If it perches at your window, be ready to admit it. Even the smallest, most ordinary joys transform the emanations of man. It can be imagined how much more luminous man’s essence becomes when there is joy about the Higher World. …There can be no limit to the flights of thought, thus the wings of joy can be directed from the Supermundane World. One should pay attention to the joy that arises in the heart.”Supermundane IV, 763

Long ago We said that joy is a special wisdom.”Supermundane I, 231

Hi, I'm one of a group of authors and editors for the Sydney Goodwill website.
Previous I wish for you …
Next Jill Bolte Taylor’s stroke of insight