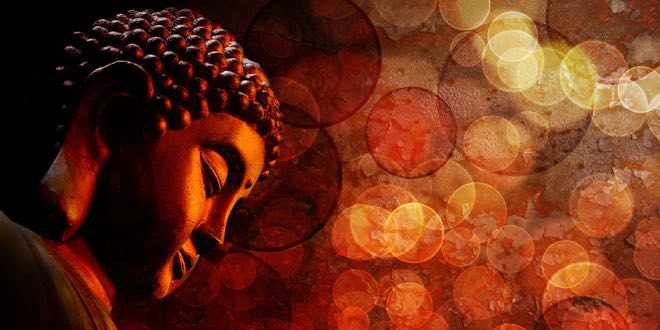 In Esoteric circles, the Full moon during the time of Taurus is said to be the high point of the spiritual festivals, the mid ground between the times of the Full moons in Aries and Gemini. This is closely related to the Buddha and Buddhist beliefs, especially in relation to the Wesak festival. It is said that the Buddha was born, became enlightened and died all during the time of Taurus. It is also said that Buddhism is ruled or influenced by Taurus.

Reflection upon why Taurus could be considered a time of great influence, might produce many thoughts with the close influence of the Buddha being a major reason. If we delve further and look at the influencing planets who are said to rule over Taurus, we might perhaps get more of an idea. On the traditional level, Venus rules this great constellation. With all of its beauty, its art, its seductive charm, Venus rules the bull with an innate feel for the senses and the will and want to experience them, with movement, grace and pleasure.

At the higher point of the spectrum, the influence changes quite a lot. It’s said that the Esoteric or Soul ruler of Taurus is Vulcan, that mysterious planet that is said to exist only on an etheric level. In its current incarnation, it is said to only exist on a level that is energetic, not in tangible substance that we can see. The same could be said for the gaseous planets, Jupiter, Saturn etc. that exist on different planes, but not in dense physical existence. The difference for Vulcan is that we cannot currently see it with our naked eyes, only with etheric vision.

This all ties in wonderfully well with the higher mantram for Taurus – “I see and when the eye is opened, all is light”. The symbol here for the bull of Taurus is one with an enlightened third eye, which is open. Perhaps when our own Ajna or third eye is opened we might see Vulcan as well, or at least see on an etheric level.

Vulcan itself is clearly a mysterious planet and, without a tangible base for us to see, its exact existence will always be rumour to most. Yet, we are finding more and more exo-planets all the time. As the world evolves, more and more planets, solar systems, galaxies are being revealed to us. Is not technology and advanced vision a result of more light peering through the veils that hold us from our true power?

Perhaps as we evolve more through the ages, Vulcan will reveal itself to us. Perhaps when we evolve sufficiently, our vision itself will take for granted what we see now. All planets have revealed themselves to us over the years, could Vulcan be the same? Given that it is considered to be both the Esoteric or Soul ruler, plus the Hierarchical ruler of Taurus, which is the high point of the spiritual year, a careful and thoughtful consideration of the effects of Vulcan is worth the effort.

Vulcan is said to be ruled by the first Ray of Will and Power, bringing in a will that can be definitely seen in those under the influence of Taurus. On lower levels it can be considered as stubbornness, the ability to be unrelenting even when another course of action would better suit. On aspirant levels, it can be seen as determination, the ability to continue on, even under pressure to give up or submit. On higher levels, one feels that Will and Power, the effects of the first Ray. Here the continuation against any odds or forces goes forth, especially if in relation to others or one’s own individual enlightenment…..

It is very interesting that the planet that most influences the sign of the spiritual peak of the year is one we cannot yet see. This perhaps gives us a clue to some of the underlying energies playing out at the moment. Not all is seen directly, some of it needs to be searched for and seen with eyes that do not necessarily focus as we are used to. Likewise communication could be similar. Now is a great time to be aware of this on more etheric levels. Look to use this time to be aware of the senses, especially those telepathically and energetically……….

There will be a strong worldly focus

The chart for the time of the full moon is quite spread out, with some strong focus in the outer world quadrant – houses 10-12. The way I would read this is the energies will be spread out, yet there will be a strong worldly focus, not an internal one. This would be consistent with current energies, where threats of nuclear strikes are floating around like storm clouds in the sky.

The Sun itself will be in Taurus of course, bringing our awareness to the senses and the physical on traditional levels, yet as discussed above, etheric and energetic levels for those who can see and sense on those levels. It has a nice healthy trine to Pluto, encouraging plutonian type energy expression. How this plays out I am not sure. It is short lived as the Sun moves quickly, yet it will be powerful. It will be at its strongest on May 8th, just before the Full Moon, when it trines both the Sun and Vulcan.

One of the most potent parts of this chart, is the formation of a kite. A kite ties in three separate shapes of aspects. This one itself doesn’t just involve planets, but has the south and north nodes, which represents our past or karma and also our dharma. The planets involved are Saturn, also related to karma, plus Mercury and the planet of the future – Uranus. Most of this is in fire signs, signalling some intense build of fire energy, but the point of the kite goes out through Aquarius, hopefully detaching some of that intensity and focussing more on Humanity.

There is a strong potential to access our inner talents

All up, the above is a powerful mixture. Look to a strong potential for us all to access inner talents. A combination of moving away from the past into our future could be welcomed. A reminder of our Soul’s purpose and commitment and the ability to make changes to meet this and express this will be assisted. Quick changes, with mercurial speed could happen. This is true at both personal and group levels.

The Moon will be in Scorpio at the time of its fullness. Scorpio moons bring a depth to feeling like no other. Strong emotional depth is the order of the day here. Look also for emotions that are held deep within to be brought to the light at this time, for full elevation out of the shadows. Watch out for smouldering emotions though, Taurean fixedness should be used deliberately here to prevent displays of emotion that reside with power….

Ruling this chart, on the ascendant, is Gemini. I see this as a perfect lead into the following Full moon period. The messenger of the Gods is there overlaying the whole chart. With a Scorpio full moon, be aware of those who pretend to be something they are not, spouting rhetoric, but have an underlying energy of that of the serpent. Instead look within, listen with subtler ears, ones that can pick up on etheric levels. Powerful times are in play, ones that are shaping us for futures to come. Vulcan the Blacksmith, is there assisting us to forge new tools that will shape us for millennia to come…..

Stephen is an Esotoric Astrologer and has a keen interest in the Esoteric line through the Alice Bailey books. Stephen offers astrological readings - - contact him via his Facebook page.
Previous The Tenderness Revolution
Next Gemini Sun Sagittarius Moon