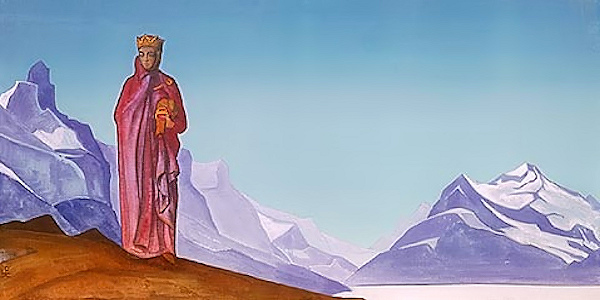 The Era of the Mother of the World

Gaps are beginning to appear in the old ways as experienced by each of us in our daily living.

The Christmas decorations are being stored away and the New Year celebration is becoming a memory. Children are preparing to return to school and their parents are re-immersing in the working week. But our eyes have been refreshed from interaction with family and friends and have been reminded that connections of love underlie what brings peace, happiness and joy. Perhaps with these eyes restored by love we may see more clearly the larger life as its dynamic forces move through our world, through human consciousness and into forms and structures of civilisations – the current one passing as a new one arises through the dissolution of the old. Gaps are beginning to appear in the old ways as experienced by each of us in our daily living. Procedures advertised with attractive images fail in the reality of their application and the gaps are filled by the expanding human heart responding, on its own innate initiative, to need – with the spontaneous outflow of a loving heart.

The examples are both great and small – yet all reveal the same human heart. One small instance was when luggage failed to arrive after an international flight and the service desk was closed for the night but staff from other areas stayed beyond their shift and role to assist passengers as best they could to resolve the situation. These apparently isolated and personal events are in fact part of a new tide in human relations that is rising on the impetus of a love that goes beyond the personal and sentimental reflections of it. As long ago as in the 1940’s the Tibetan Master wrote:

Men are rapidly developing an understanding goodwill. The world is full of movements for relief and for the amelioration of human distress, and this from the point of small and large communities and also nationally and internationally. To this the Red Cross, UNRRA and many analogous and well-intentioned affiliations of men everywhere bear witness. This indicates not only a mental polarisation but responsiveness to the love nature of God; these together indicate a fusion and a sensitivity which is new in human history and which is most encouraging, testifying as it does to the success, at last, of the evolutionary process.” Discipleship in the New Age II, page 295

The Tibetan also instructed one of his disciples about the underlying power of love:

Love more, my brother. You only deeply love two or three people; let that limited love be the seed which will produce the flowering forth of a loving spirit. Disciples need to remember that love brings all earthly karma to an end. Love induces that radiation which invokes and evokes not only the heart of God but the heart of humanity also. Love is the cause of all creation and the sustaining factor in all living… Make your remaining years expressive of radiating love…. Say not always the nice or loving thing, but learn to say the hard things with unalterable love” Discipleship in the New Age II, page 541-2

It is the civilisation of the heart and soul of humanity gradually coming into its own.

This new force permeating human interactions – with one another and with all the kingdoms of Mother Nature – is the harbinger of a new civilisation which nurtures rather than exploits, and serves rather than represses. It is the civilisation of the heart and soul of humanity gradually coming into its own. And in this new territory of being the heart has expanded in its inclusive embrace – beyond all personal limits – to care and nurture whatever aspects of our planetary life come into the span of its reach in any moment or place. This was reflected beautifully and compellingly by Pope Francis in his homily for Mass on New Year’s Day as in these excerpts:

The word mother (mater) is related to the word matter. In his Mother, the God of heaven, the infinite God, made himself small, he became matter, not only to be with us but also to be like us. This is the miracle, the great novelty! Man is no longer alone; no more an orphan, but forever a child.
… “Mary kept all these things, pondering them in her heart” (Lk 2:19). She kept them. She simply kept; Mary does not speak. The Gospel does not report a single word of hers in the entire account of Christmas. Here too, the Mother is one with her Son: Jesus is an “infant”, a child “unable to speak”. The Word of God, who “long ago spoke in many and various ways” (Heb 1:1), now, in the “fullness of time” (Gal 4:4), is silent. The God before whom all fall silent is himself a speechless child. His Majesty is without words; his mystery of love is revealed in lowliness. This silence and lowliness is the language of his kingship. His Mother joins her Son and keeps these things in silence.
… To set aside a moment of silence each day to be with God is to “keep” our soul; it is to “keep” our freedom from being corroded by the banality of consumerism, the blare of commercials, the stream of empty words and the overpowering waves of empty chatter and loud shouting.
… Mary kept all these things, pondering them in her heart. What were these things? They were joys and sorrows. On the one hand, the birth of Jesus, the love of Joseph, the visit of the shepherds, that radiant night. But on the other, an uncertain future, homelessness “because there was no place for them in the inn” (Lk 2:7), the desolation of rejection, the disappointment of having to give birth to Jesus in a stable. Hopes and worries, light and darkness: all these things dwelt in the heart of Mary. What did she do? She pondered them, that is to say she dwelt on them, with God, in her heart. She held nothing back; she locked nothing within out of self-pity or resentment. Instead, she gave everything over to God. That is how she “kept” those things. We “keep” things when we hand them over: by not letting our lives become prey to fear, distress or superstition, by not closing our hearts or trying to forget, but by turning everything into a dialogue with God. God, who keeps us in his heart, then comes to dwell in our lives.
… The heart makes us look to the core of the person, his or her affections and life.
… Looking to the Mother, we are asked to leave behind all sorts of useless baggage and to rediscover what really matters. The gift of the Mother, the gift of every mother and every woman, is most precious… for she too is mother and woman. While a man often abstracts, affirms and imposes ideas, a woman, a mother, knows how to “keep”, to put things together in her heart, to give life. If our faith is not to be reduced merely to an idea or a doctrine, all of us need a mother’s heart, one which knows how to keep the tender love of God and to feel the heartbeat of all around us. May the Mother, God’s finest human creation, guard and keep this year, and bring the peace of her Son to our hearts and to our world.” For the full text visit: – http://www.vaticannews.va/en/pope/news/2018-01/pope-homily-new-year-2018-mother-of-god-full-text.html

And in the Agni Yoga writings we are told of the coming time of the Mother:

I have already told you that the Mother of the World conceals Her Name. I have already shown you how the Mother of the World veils Her Face. I have already made mention about the Mother of Buddha and Christ.
Indeed it is time to point out that the one Mother of both Lords is not a symbol but a Great Manifestation of the Feminine Origin, in which is revealed the spiritual Mother of Christ and Buddha.
She it was Who taught and ordained Them for achievement.
From times immemorial the Mother of the World has sent forth to achievement. In the history of humanity, Her Hand traces an unbreakable thread.
On Sinai Her Voice rang out. She assumed the image of Kali. She was at the basis of the cult of Isis and Ishtar. After Atlantis, when a blow was inflicted upon the cult of the spirit, the Mother of the World began to weave a new thread, which will now begin to radiate. After Atlantis the Mother of the World veiled Her Face and forbade the pronouncement of Her Name until the hour of the constellations should strike. She has manifested Herself only partly; never has She manifested Herself on a planetary scale.
One may cite many examples when even high Magi left behind them unexpected consequences and a desire to find support in the lower strata of matter. Such perversion could be termed the channel of the intellect, and can arrest for a long time the communion with other worlds.
Now people mechanically search for the already spiritually predestined.
The Teaching of the Future Epoch will be re-union of the spirit and intellect.
The course of the planets permits the hastening of the communion between the worlds, and the development of the human spirit will proceed along new ways.
The luminaries permit the acceleration of the course of humanity.” Leaves of Morya’s Garden II, sl 220

Verily the Era of the Mother of the World is based upon the realization of the Heart.” Heart, sl 106

Entering into our true being as souls we approach the Kingdom of Souls and a pathway opens up between. By this means shall the One “Whom angels and men await” return to us.

As we move into a new year, let us not “lose heart” as we experience the old world passing away but keep our eyes focused on the burgeoning new era wherein the heart and soul of a new humanity is learning how to nurture and serve the coming glory of our world and the One Life in Whom we live and move and have our being. Entering into our true being as souls we approach the Kingdom of Souls and a pathway opens up between. By this means shall the One “Whom angels and men await” return to us.
“Now is the time to unite the soul and the world.
Now is the time to see the sunlight dancing as one with the shadows.”

Hi, I'm one of a group of authors and editors for the Sydney Goodwill website.
Previous Ponder on This: Part Two – The Origin
Next Aquarius Sun Leo Full Moon 2018