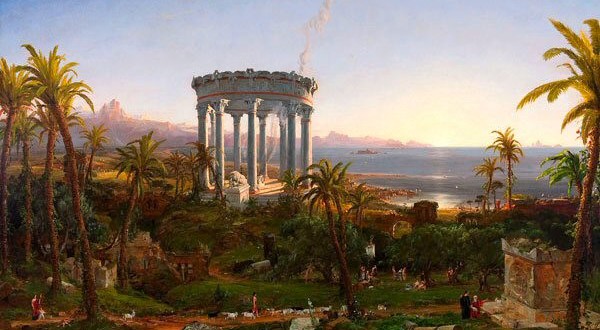 The Spirit of Peace by Jasper Cropsey 1851
Photo: Woodmere Collection

The Spirit of Peace and Equilibrium

This month, on Saturday 21st September, the 30th anniversary of the United Nations International Day of Peace will be celebrated in a world where great movements for peace, humanitarian agencies, compassionate initiatives and peaceful international relations are multiplying at an ever increasing rate. At the same time we see continuing the bitter legacy of religious and sectarian wars, torture, the use of chemical weapons on the innocent, unilateral interventions and invasions, terrorism, the ongoing oppression of women and minorities. Yet it seems that all actions and events, both constructive and destructive, are unitedly bringing about the clarification of essential issues so they may be more clearly understood, taken to heart and resolved.

Behind every thought, feeling and act – there is always that which unites us

This great double-edged push to understanding and transformation is made possible by the strengthening of all that unites us – global communication, growing grassroots initiatives and, behind it all, the human spirit which, in spite of all our recalcitrance, yet urges us onward towards our destined role in the unification of the worlds – across the worldly divisions and through the dimensions between the kingdoms in nature and the kingdoms of the Spirit. In everyone – behind every thought, feeling and act – there is always that which unites us and which we share in common. Seen in the Light of the Great Life we share, our differences take on a different proportion and become significant as the multiform expression of the one intentional being.

Here in Australia we have just held the election of our Federal Government and it has been remarkable how people who hold the same values and beliefs can yet so ardently disagree about who might best govern the country. It is not possible to fully understand the implications of the policies of any party. Judgements are made on such partial information and distorted presentations of it that it is easy to stir the power of an ancient “tribal” sense of identity. In the end a people elects the government it needs in order to experience, learn and understand more deeply the forces that drive us forward. There is a pull between the material, individual welfare and the sustaining of the whole context in which each of us live and which ultimately nurtures and provides all that will bring the inner human spirit into expression.

Increasingly it’s the issues in people’s minds that drive our leaders rather than leaders dominating their people. A great shift is in process whereby the greater community is guiding its government towards a more truly representative role that serves the common good. We are moving from the Age of Authority into the Aquarian Age of Universality where the voice of the people is growing in wisdom and power within the nurturing context of experience. This embracing context in which humanity is nurtured, challenged and matured might be called the Mother of the World. The balancing force that urges us toward the harmony of a truly interrelated and interdependent world might be called the Spirit of Peace and of Equilibrium.

We are told that:

This Spirit is a Being of tremendous cosmic potency … This Spirit of Peace is not the sum total of an emotional and static calm, bringing to an end the turmoil on the Earth and instituting an era of peace. He is, in a mysterious sense, the Spirit of Equilibrium; He works with the Law of Action and Reaction and the inevitability of His activity will be recognised. His work will demonstrate in two ways—fully when the Christ appears among men and slowly and gradually until that time” [The Reappearance of the Christ, page 74]

In the Agni yoga writings we read of preparation for that coming time:

…After some seeking I found Christ seated upon a sand mound looking at the sands flooded by moonlight. I said to Him, ‘We have lost the way. We must await the indication of the stars.’
‘Rossul M., what is a way to Us, when the whole world is awaiting Us?’
Then, taking His bamboo staff, He traced a square around the impression of His foot, saying ‘Verily, by human feet.’
And making the impression of His palm, He surrounded it also with a square. ‘Verily, by human hands.’
Between the squares He drew the semblance of a pillar surmounted by an arc. He said: ‘O how Aum shall penetrate into the human consciousness! Here I have drawn a pistil and above it an arc, and have set the foundation in four directions. When by human feet and human hands the Temple will be built wherein will blossom the pistil laid by Me, then let the Builders pass by My Way. Why should We await the way, when it is before Us?’
Then, rising, He effaced with His cane all that He had drawn.
‘When the Name of the Temple will be pronounced, then shall the inscription emerge. In remembrance of My constellation, the square and nine stars shall glow over the Temple. The sign of the foot and the hand shall be inscribed above the Cornerstone.’” [Illumination, II:V:5.]

The world manifests according to the direction of our thinking. We then see the results, experience their effects and refine our thought-creation expanding it beyond local effect until it bridges space and time and lights our way home to a glorious, all-embracing totality. We are advised:

…Let the things of everyday life vanish, but let the country of the future be embodied in thought. And what cleanses the spirit more thoroughly than the thoughts about the welfare of others? And what tempers the armour of steadfastness better than the wish to lead others to Light? And what weaves a better smile than a desire to see the very last child laughing? I urge you to think thus about the future, to place daily a pearl into the necklace of the Mother of the World. And so, concisely and simply think how to adorn the Hearth of the World.
There should be no comparison with the past, for a wrinkle of the past is usually a nest of errors. One can sail past alien shores; one has only to admire the world of light bestowed upon all that lives. Light is the best bridge between the visible and the Invisible.
When one can think about the future not by the evening fire but in the radiance of the sun, then the dew drops of prana illumine the thinking brow.” [Illumination, III:III:10.]

Can one trust a blind helmsman? Is it possible to think that the rags of antiquated thought can be worn in the New World? One must understand that the gift of the New World will be brought to those gates that have been opened to it. Truly, the New World wishes to bestow a beautiful garment. But humanity must approach to receive the fabric woven by the labour of the Mother of the World.” [Agni Yoga, 82.]

And always the Mother, the guiding magnet of Beauty, heartens, uplifts and inspires us forward in our journey:

…The Mother is Beauty; the world is self-sacrifice. Precisely by these two fundamentals are the Gates opened.
The bridge between the planets, and the shortening of race cycles, rests upon these two fundamentals.
Why the path of gradual progress, if a single flash of illumination can lift one over the boundaries?…”
[Illumination, II:VIII:12.]

They are rending the Raiment of the Lord.
They scoff at its tatters.
But the daughter of the world and the Mother of the
Universe will mend the pieces of this Raiment.
And you will come ready to receive your vestment.
For, wherefore the power and wherefore the sacrifice,
if there be no joy?
And where is compassion,
And where is devotion,
And where is the love of creation,
If your shoulders are not bedecked with the Raiment
of the Mother of the World?”
[Leaves of Morya’s Garden I, The Call, Book of Joy 357]

Hi, I'm one of a group of authors and editors for the Sydney Goodwill website.
Previous The Discipline of Joy and Achievement
Next What Radiates from the Heart of God?